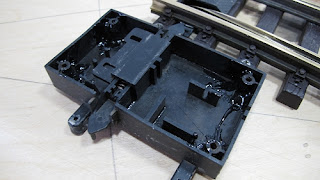 We've been fitting rail clamps to the garden railway and after rounding the curve at one end, reached the first station point.
The mechanism had seized so the chance was taken to remove it and give the turnout a service on the workbench.
Opening up the switch box, there was a bit of earth in there and some general much. I removed it all and lubricated the moving parts lightly with some furniture polish. I don't want to use oil or grease, these will attract dirt. Far batter to polish all the plastic parts so they move smoothly.
Taking the box apart, all but one of the corner screw connections had broken, but the bits were still in the box. First with superglue and then with Poundland Epoxy, they were fixed. I think the screws are self-tappers so a bit of glue in the holes wouldn't have worried them much. As long as I waited until it was dry anyway!
Reassembling the box is a bit of a fiddle as the turny bit has to engage with the slidy bit, but once done, the point changes perfectly. After that, a quick burnish with a track runner, the electrical contacts under the blades polished with a fibrepen and the point could go back in place. 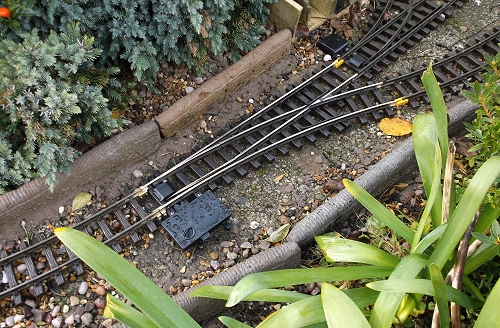 There's still work to do on the line. More clamps for the other curve, more ballast and tightening up the joints in the station area, but we are getting there.
Posted by Phil Parker at 5:30 AM

Furniture polish- never considered that and what a good call!

Bog-standard candle wax is another good one for similar reasons.

I've got a lump of Beeswax for jobs that need a bit more, but the spray can of polish was handy.