Virtual shows aren't so different from real ones 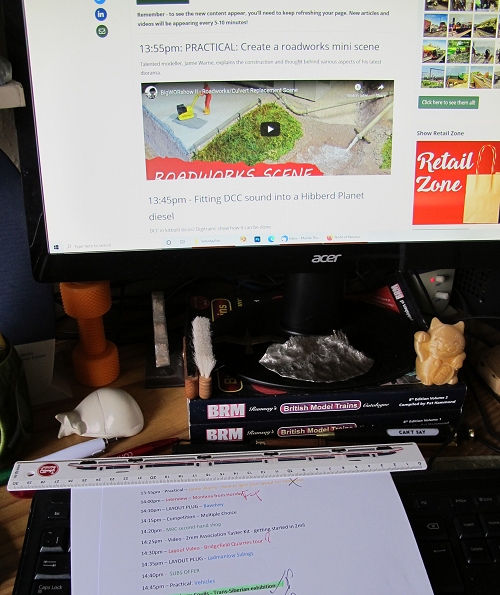 I spent last Sunday afternoon posting the features into the timeline of our latest Virtual Model Railway exhibition.
The process of putting on a virtual show isn't that different to that of a real one. For a start, the week running up to the weekend was chaotic. There was an awful lot of last-minute work. Some of the trade interviews have to be carried out late in the day so they include announcements.
There's also a fair bit of loose-end tying up. It's easy to put odd jobs off but eventually they come back to catch you out!
All the prep means that the weekend itself is reasonably calm. Mostly, while "on duty" you sit copying and pasting content into the site at the appropriate times. You have to be there, but it's not too tough. Real shows are a bit like this - once the doors open you have to get used to there being nothing more you can do.
At the end of it, there's also the slight sense of deflation - after weeks of extremely busy build-up, it's all over. Back to work on Monday then.
Oh, and just like a real show, I managed to splurge on the second-hand stall, buying stuff that I (mostly) don't really need...
Anyway, if you dropped in, I hope you enjoyed our efforts. Feedback is appreciated as we can bear it in mind for the next one.
Posted by Phil Parker at 5:30 AM