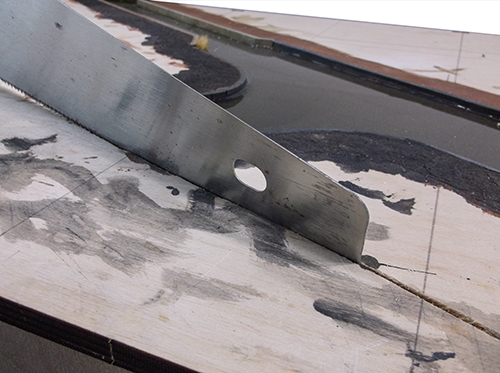 Time for a job that I've been putting off. Cutting the excess baseboard away.

On the left hand side of Selly Oak, there should be a massive factory. It's not there now, I can't find much in the way of photos and even if I could, modelling the thing would take forever.

So, the plan is to trim the board back so it's a two foot wide at the end, which will allow any extension boards to just feature the embankment the line runs on to.

I had initially thought jigsaw for this, but that is dusty, so the work really needs to be done outside. And it was raining. Also, jigsaws are great for intricate cuts, hence the name, but a bit rubbish for straight lines.

So, out came the big fine-cut saw and I summoned up the courage to have a go. 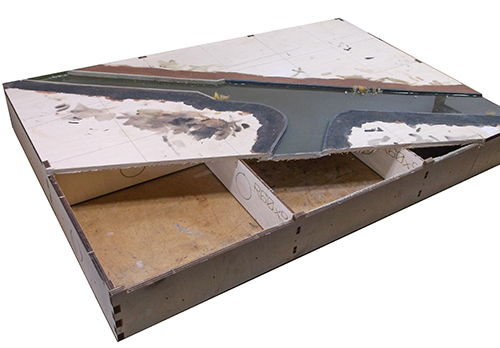 With a but of care, I managed to confine the bulk of the cutting to the top surface, which was then peeled away, leaving the supports. These were then marked with a square and cut as neatly as I could.

A fresh piece of 6mm ply was nailed and glued in place and then trimmed back. The result looks quite tidy.

I'd like to do something with the corner between the two boards, but I have kept the old corner to experiment with. For the moment, I need to make progress on the scenery.

Even if you could find enough information about that factory - even if you had loads of spare time - would you really want to model it?

I seem to recall you saying that this is all about building a backdrop against which to display / photograph models - which might be rather difficult with a large building blocking the view.

As for the removed baseboard section, are there any projects which call for a raised section or building at the back - or an odd shaped extra section at the front?

Well, I guess it's either that or treat it as a kit of parts - bridge deck etc.?

Of course, some people might suggest another potential add-on for the next magazine project layout - which some chancers would doubtless regard as of vital importance.

That's right - somewhere for future show visitors to rest their beer glasses, whilst they lean against the layout.

Thankfully, I am joking. My sense of humour has always been rather dry - just as dry as my taste in lager ... .