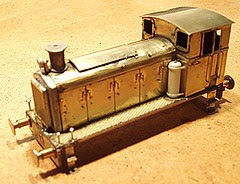 Brass Barclay
Originally uploaded by Phil_Parker.
Back to the Barclay production line. Just the thing for anyone's model railway. This is the first locomotive produced. It sat on Trevors stand for a few shows while I built the second one properly.

Because I didn't have any instructions I made a couple of mistakes with my first go. Nothing that anyone will notice when I have finished it.

Based on the photo I've been working to, the air tank by the cab isn't the same as the one in the kit, not that I got one as I had the etches long before all the castings were ready. A bit of plastic tube sorted this out quickly though.

My dilema is the colour. The prototype photo shows wasp stripes on the end and buffer beam. For my layout I think black with red buffers would be more appropriate, but would the "correct" version be more interesting to look at ?

Since I hate painting stripes I tend toward the simpler livery but I'll decide once I've primed it.
Posted by Phil Parker at 6:53 PM