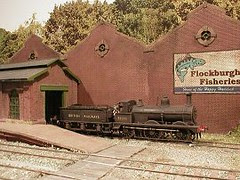 2F on shed
Originally uploaded by Phil_Parker.
Another weekend, another show. This time we've taken Flockburgh to Leamington Spa. Not too far away this time - only a couple of miles !

Flockburgh had a somewhat pained birth. Many times it was on the verge of scrapping because we couldn't get the locos to stay in contact with the track. Now it works fine. OK, some can only run one way around but we can live with that.

Reaction has been very positive. Most of the club members haven't seen the model as it's only its fourth show. Since I'm not one for building stuff at a club - why load up all your tools and take them to a workbench in a cold(ish) room a few miles away when you can work in comfort ? - the layout has appeared full formed as far as they are concerned.

Another group who are enjoying it as 3mm Society members who are pleased to visit a general show and find something in thier own scale. We can talk about the wonderful CD catalogue that came with the last "Mixed Traffic" or bemoan the lack of interest shown in us by the committee. It's suprising how many people know me but I don't know them. Probably something to do with not being good at remembering names. Of course a lot of time you never get a name, just a face in a crowd. As long as it's a freindly face, that's all that matters !
Posted by Phil Parker at 8:15 PM