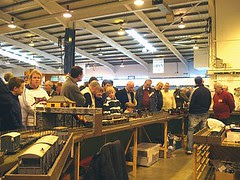 16mm AGM
Originally uploaded by Phil_Parker.
I know I’m not a member of the 16mm Society but since the show was only just down the road it would have been daft not to pay a visit. I’m a great believer that you can always learn something from other peoples hobbies anyway. Besides, I wasn’t doing anything special, it gave me an excuse not to go to the gym and surely I wouldn’t spend any money.

So I arrive at Stoneleigh and find the hall. They are using one of the new ones (new for the NAC which means not smelling of cattle or falling down but still at least ten years old) with loads of space. Around one side the advanced tickets queue stretches off into the distance. On the other those of us who will have to hand over money form a similar length line.

One fiver later and I’m inside. The hall is big. And full.

Traders filled the outside edge, and mingle with the layouts in the middle. Of course these are a bit bigger than I’m used to since the models are larger. I suspect the atmosphere was rather fuller of steam than usual but since the ceiling was high no-one noticed. Besides, meths fired locomotives weren’t allowed – spoilsports.

It’s amazing who you meet at something like this. I hadn’t expected to find the ex-publicity officer (and current webmaster) from the 3mm Society for example. I also discovered that Worsley Wagon Works and Cambrian do 16mm stuff – both traders I associate with smaller scales.

Cambrian even sold me some useful air horns for Idris along with some moulded bolt heads ideal for use on boats. Proper cross-fertilisation of hobbies !
Posted by Phil Parker at 7:09 PM