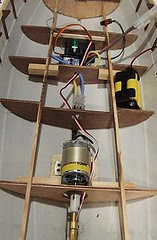 Although the kit is described as suitable for radio control it’s difficult to work out where this is supposed to go. The boat is pretty open so hiding the “gubbins” isn’t easy. The instructions and plans don’t help either.

As you can see from the picture, we’ve managed to keep everything below the decking. Just. The batteries will go in the log bunker under a false load which keeps them easily accessible. Four AA’s look like they’ll be enough to run the boat for at least an hour. Replacing them at the waterside won’t be a problem either. We can even buy a pack of Duracells if we want to sail at the drop of a hat.

The centre of the boat houses the steam engine, in this case a plastic fake but it will look the part. It’ll hide the receiver and speed control.

A quick test in the bath revealed a lot of lead is needed. So much that the batteries sitting at the side don’t affect the trim. This is added in the form of giant lead shot from divers weight belts (we were given a couple of worn out ones) packed into sandwich bags and wedged into the spaces at the side of the hull.

Next stop is the lake for a proper sail. If all is well the rest of the woodwork goes in and a 1/12 Bogart & Hepburn need to be found, or should that be "cast" ?
Posted by Phil Parker at 7:27 PM