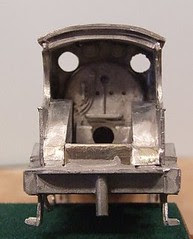 armstrong cab
Originally uploaded by Phil_Parker.
The great fear with old kits (and some new ones) is that the bits won’t fit together. K’s kits aren’t usually too bad on this score with relatively little fettling required.

The Armstrong cab interior is another matter. The splashers came first. From the instructions it looked like they lined up with some raised lines inside the cab sides. Put there though and there was little space in the middle for the crew. You’d struggle to get a driver in never mind the fireman !

So I decided they had to fit on top of the lines. Then they showed above the edge of the sides slightly. I thinned the metal down a lot and removed most of the cab lines to drop then down a bit. This left a gap at the bottom though which I filled with scrap etch and a lot of fettling. Thanks goodness for the gap filling properties of low melt solder.

The floor was also hopelessly wrong so some sheet nickel silver was cut to fit. I suppose I should have made the whole interior this way as it would probably have been quicker than making the supplied parts fit. If I’d stepped back and thought about it that is the way I would have gone, but at the time I had got stuck into the job and just carried on.
Posted by Phil Parker at 7:37 PM