Captain on the bridge 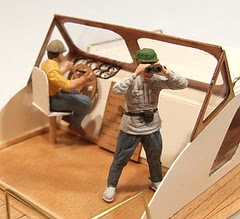 crew
Originally uploaded by Phil_Parker.
From the figure selection I picked the JCB driver and a soldier using binoculars as Idris’s crew.

The driver lost his arms and lower legs. These were re-attached in new positions so he’d fit the seat and reach the wheel. The arms were a pain to stick so I shoved Peco track pins in with a soldering iron to hold them in place. The legs went on OK with superglue. His hard hat was sufficiently unconvincing to look OK as a casual cap once painted beige. To be honest the kit wheel should be replaced as it’s too large and crude. If I did this agin something made of wire would be substituted.

The soldier took a bit of carving to remove holsters and other military paraphernalia. I cut a slot in his forehead with a razor saw and inserted some plastic to turn his hat into a baseball cap. This is pretty convincing and really easy to do.

Both figures were completely repainted to make their clothes look casual. Originally they both wore shorts but this didn’t look right so blues jeans were the order of the day. Considering the soldier is wearing long boots, it’s amazing how difficult it is to spot this.
Posted by Phil Parker at 8:04 PM