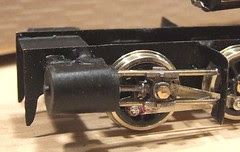 1361 cylinders
Originally uploaded by Phil_Parker.
It’s time to stop building new stuff for the 1361 locomotive and start facing the bits I bought. For the chassis, this means cylinders as everything else goes in the bin.

I’m not sure how these were made originally but what I had after carefully removing them from the old chassis (read: waggling the parts until the glue broke) were whitemetal cylinders with slide bars apparently moulded in and then attached to a metal support bracket. Running in this is a whitemetal crosshead attached to a whitemetal & brass coupling rod. As bought the brackets stuck a long way outside the footplate.

While not a fan of soft metal crossheads, they did work well and looked quite nice so I’ve hung on to them. Originally bolted together, the components are now soldered. The bolt just attaches the coupling rod.

The cylinders were cleaned up which made the brackets fall off, as they were just glued on albeit with loads of old, hard, difficult to remove, glue. The slide bars seemed to vary in length very slightly and were all longer than those found on the prototype. This is (probably) to compensate for a non-scale crank throw so I left well alone.

On one side I simply soldered the casting to the chassis with low-melt and then moved them around until things looked right. Then tested the chassis with the body and moved the cylinder until it looked right and didn’t get in the way. A simple coupling rod was made from rail filed flat on the face. Everything worked and there seemed to be plenty of clearance.

Over at the other side the clearance disappeared. I’m not sure why, but fixed it by building up the missing metal with low melt solder. Not sophisticated but in this case, effective. The result is hidden under the footplate anyway. I did made sure that the cylinders were in about the same position on each side of the model and were level so the front on view looked OK.

The final job was to put a grove in the moulded valance under the footplate to let the body sit down on the motion brackets. A junior hacksaw did the job giving a 1mm wide slot which give enough space for the bracket and allows for my lack of precision in the work.

I’m quite chuffed with the end result. I’ve built a compensated chassis with waggly bits that don’t stick out the side of the body. Everything runs without jamming up solid too, apart from when one of the crank pins unscrewed itself but we won’t mention that. All I need to do is fit some pickups and brake gear then move on to the pretty bits.
Posted by Phil Parker at 6:31 PM