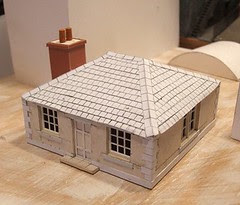 Small dockside office
Originally uploaded by Phil_Parker.
I’ll be honest, Christmas is a nice but fairly quiet time in our household. It doesn’t really start until 10ish and winds down after lunch with no huge parties full of people stuffing their faces with food and drink.

So it was that rather than sitting around getting bored, I did some work with bits of cardboard. This little building is based on one seen in the distance in a photo of Gloucester Docks. The proportions are worked out from the picture, then I made a very rough mock-up which has been sat around for a few days.

So, after breakfast on the 25th, I had a bit of a dig around in my building bits box. This gave me windows and after making some slight tweaks to the proportions in light of these, I started cutting the walls from offcuts of Daler board. After the windows were glued in, sills and lintels were added from microstrip.

Other details is from various thinknesses of card and paper. Roof slates are paper. The chimney was a last minute addition when I realised that sat on the front in Scotland you’d want a bit of heating !

Total build time was 3-4 hours I suppose broken up into chunks and accompanied by various bits of telly. Lets be honest, most people watch that much on the goggle box, I just did it while building.

I think the result looks really nice. Once painted I hope it fits in on the layout.
Posted by Phil Parker at 6:13 PM