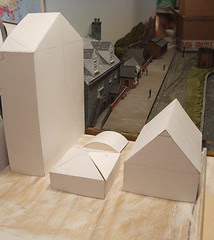 flockborough mockup
Originally uploaded by Phil_Parker.
When I knocked up my Christmas building a few days ago, it wasn’t entirely plucked out of the air. I knew it would fit in on the layout because it wasn’t the first time I’d built it.

Mark 1 had been a somewhat simpler version though. It had no windows, doors or indeed any detail at all. Made out of cheap card it was just a mock-up to get the “feel” of the model. This sits alongside mock-ups of the warehouse and chapel on the new extension board.

I like mocking things up. It might look like an unnecessary step but most of the time it actually saves effort because you don’t put a load of effort into a model only to discover is somehow looks wrong. If you do then there is the dilemma – do I scrap the effort and start again or do I plough on regardless and hope things turn out OK. Most of the time it’s too painful to dump the part completed item which leaves a layout that you are dissatisfied with.

This time we learned just how much space you get in 3mm scale as opposed to 4mm. The assumption had been that the chapel would fill the space available. In fact I wasn’t sure that the little office wouldn’t do it on it’s own. With the mock-ups in place it became obvious that even this modest space would take more filling than originally thought. Behind the office there will be some open sheds (the round toped thing in the picture) with plenty of space to move a small lorry.

We also get a feel for what the layout will look like with it’s new extension. Ideally you need to leave it to sit and keep looking occasionally to see if the arrangement still satisfies. No time for this but I think we’ll be happy with the result.
Posted by Phil Parker at 6:33 PM