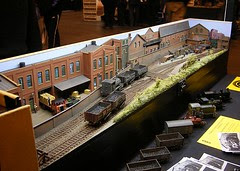 As I’ve commented before, Sunday’s are traditionally quieter than Saturdays at any show. People hoping to bargain hunt obviously want to be in the door as early as possible to make the best of any opportunities, while others just want to have the maximum chance to wander around. In the case of the NEC, public transport is better on the first day of the show so that rarest of beast, the railway modeller who actually gets on a train will need be present in much lower numbers on Sunday.

This year things seemed different. Thanks to the bigger new hall we were in, wide aisles were the order of the day. Last year the only way to breathe was to get behind a layout. This Saturday getting around the hall was easy. Sunday I struggled in several places – not badly but enough to make me think there were more people around.

As yesterday, chatting was pretty constant between 10 and 4. Our visitors were pretty varied too (hello if I mean you !) with Canadians, Irish and Swiss appearing to ask questions. In turn we quizzed them about the hobby in their countries.

We’ve helped with a work of fiction too – an author of children’s books (sorry, not names due to rubbish memory, but even if I hadn’t forgotten, this is like a confessional, everything is in confidence. Sort of.) plans to include a character who is a railway modeller and stopped for a chat to see if we could explain what makes us tick. Not sure if we helped much but we did our best. It was a nice break from explaining what Daler board is anyway…

That’s the second best thing about being a demo stand. You never know who will turn up next and what they want to know. Some ask a question and then proceed to tell you the answer. This is especially amusing if we know you are wrong or have plainly never done what you claim, and yes we do laugh about this afterwards. Most ask or comment on what we have on the table and off we go on another conversation that probably digresses quickly from the original point.

Some need a specific thing explained, others have a much more general need for information. “How do I start” give plenty of scope, “What sort of coupling should I use for 009 models” doesn’t. The later stumped me a bit as I’ve never actually built a 009 model but after a bit of digging it seemed that the modeller wasn’t setting up the Bemo’s that were giving him grief constantly. A quick explanation of my Spratt & Winkle setting up track and he went away vowing to build something similar. I hope he does and that it gives the desired results. Getting coupling working properly is a job easily overlooked but one that will pay dividends far in excess of the work required.

One lesson learned is: Go to the cashpoint before the show. I forgot and so the trade didn’t benefit from my visit as much as I might have liked. There is a money machine in the NEC and it has a permanent queue of 50 in front of it, or so it appeared anyway. I still managed to come back with a couple of kits for Russian locos (I know, I don’t need them, but then what has that got to do with it) and some card Manx wagons.

The best thing about being a demo is that you have little to pack away and so you get out of the hall quickly. We packed out entire stand in one of my Mum’s scuba diving bags, which wheeled in and out on a little trolley. No need to get the car in the hall for us which meant we were home an hour after it shut.

So, a good weekend. Thanks are due to the Warley Model Railway Club and especially Paul Jones and Nick Tilson who organise the event and demo stands respectively. Also, the slightly camp bloke in charge of the exhibitor catering and the two NEC car park stewards who astounded us by being helpful and giving the right directions. Thanks also to Jackie from the Larger Scale Model Railway Society who provided the required banter for the whole weekend from the stand next to us.

And the award for “Phil’s Layout of the Show”, that prized trophy (Ok, mention on the Blog) for the layout I’d most like to have built ? Tim Watson’s model on the L&WMRS stand. It’s a really lovely little model with detail and operational interest. Bets of all, it was tiny and hopefully has persuaded a few people that they can find space to build a model and they can actually finish one. And that is what we are there for.
Posted by Phil Parker at 10:06 PM