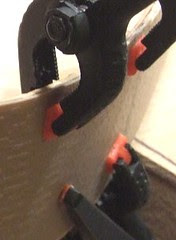 sticking plastic
Originally uploaded by Phil_Parker.
It doesn’t matter what we make buildings out of; there is always a stage where plasticard has to be stuck on the surface. Although not an exciting part of the job it’s vital to do it properly.

Years ago the glue of choice for this task was a Dunlop contact adhesive sold in a yellow bottle. You smeared glue on the wall and plastic, left it to go clear and then pushed the two together. The grab was instant and after a while the adhesion was great. Model buildings 20 years old still look fine having been done this way.

Unfortunately the glue was made up from chemicals extracted from hens teeth and rocking horse droppings making it particularly hard to get hold of. I think in 2 and a half decades we managed to get two bottles.

Necessity being the mother of invention, I have tried other glues. It’s important not to use a solvent based product or it will eventually attack the styrene. So I tried “Liquid Nails”, a builders glue with fine sticking properties. This works but isn’t the easiest substance to smear thinly – builders like to gob the stuff on but modellers need a more controlled approach.

Now we are trying Bostick Solvent Free glue. It comes in tubes and is reasonably easy to get. Unlike Liquid Nails its runny enough to smear and there is no stringing like UHU or Evo-Stick. Only time will tell if it stays sticky for a couple of decades but the results so far are promising.
Posted by Phil Parker at 8:15 PM