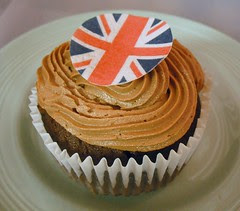 I'm not sure how this came about, but Chris Mead had been asked to take his model railway layout "Overlord" to the British Legion Armed Forces Day celebration that was happening around the corner from where I live. It would have been churlish to refuse to go and help him out with it so I trooped (geddit ?) along to the sports and social club just in time to help him unload it from the van.

The layout was set up in the bar area well ahead of time. Not because we are particularly punctual but because the event didn't start until 11am. While waiting we sipped a NAAFI tea from impressive paper NAAFI beakers. Since it hadn't been used for a while and lives in the less than ideal confines of a garage, there was some nervousness about how well Overlord would work but apart from an electrical problem with one point, all was fine.

One of the things you have to do with this layout that I've not experienced elsewhere is to level up the sea. The front 2ft of the model is home to a large collection of boats. Ironically they sail on German water - the greeny mix comes from the BASF laboratories thanks to a helpful chap at Bremen show a few years ago.

The day went well. Not very busy but lively enough. We seemed to have people all round the layout rather than just out the front. Several even got to have a go at operating, or at least experienced the "interesting" wiring. They moved some trains around thoroughly enjoyed themselves. A couple of the youths involved we of an age when you wouldn't expect them to be interested in anything as uncool as toy trains but they seemed happy enough. Happy enough to help us load up again at the end of the day in the rain anyway.

I quite like doing this sort of show. At "proper" exhibitions, people know how to behave and aren't near;y as interested most of the time. This crowd were seeing serious toy trains for probably the first time and generally seemed to like what they saw, even if it was mostly tanks'n'guns. It probably helps if the operators are happy to chat rather than ignore their audience, but while we might not convert anyone to the hobby but we didn't turn up in grease top hats and make "choo choo" noises either so as to enforce the stereotypes more normally associated with this interest.

And the NAAFI chocolate cake ? Delicious. If an army marched on its stomach, then at least it's full of good cake. I think I'd just offer the enemy some if they stop shooting though, bound to work. Give cake a chance, I say. 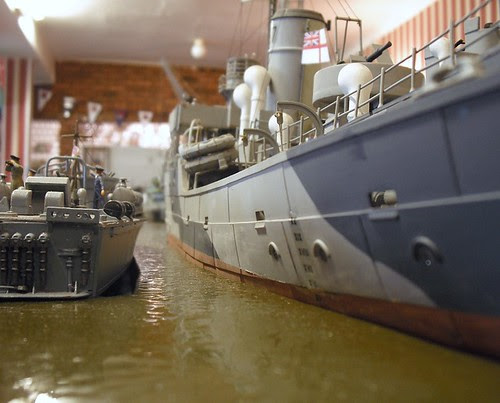 I've been reading for some time the resin used was from BASF - but have they ever marketed the material - and if so what's it called, where can you get it from and how much does it cost ? And/or are there any other alternatives on the market that can give equal results ? Thanks !

It's not a BASF product, the guy who developed it just worked in their labs. It's not on sale as far as I know.

Personally, I use yacht varnish. Do a quick search on here and you'll find plenty of mentions.