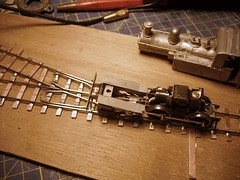 To get an idea of how Foxdale's track will work, we built a test piece. Nothing fancy, just a point with bits of track going off a little way.

I actually want to test the ballasting method with this, but before doing so I've gapped the PCB strip and put some power into it. The single part-built locomotive was dug out of it's box and placed on the rails. Then electricity was supplied and it stuttered forward.

So I reversed the power and it stuttered backward and fell off.

Looking underneath, the linkage for the handbrake wasn't attached to anything and when swung down, caught the rails. A touch of solder tacked this out of the way. While I was under there, the pickups had been made of stupidly thin phosphor bronze wire so they cam off and were replaced with "Phil's standard" stuff.

More testing and another problem appears. The loco won't go around the corner. Isle of Man engines may only be 2-4-0's but the front 2 is a long way out front so the pony has to be sprung. I'd done this with a bit of nickel silver wire which appeared to be too stiff to allow the truck to swing. Replacement with phosphor bronze helped a bit but not a lot. A touch of gauge widening also helped. These are really long-wheelbase locos and we want them to go around tight-ish points.

All this is horribly familiar. When we built Flockburgh there were many sessions of testing when rolling stock seemed allergic to track. In the end we fixed this, let's hope it is easier this time.
Posted by Phil Parker at 1:17 AM