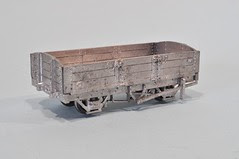 Foxdale track building has commenced but if we are going to build model permanent way, we need some rolling stock to try it out with. In my Isle of Man box I've collected several wagon kits and so I grabbed the top one from the pile to stick together. Sometime in the future I'll do a proper blow-by-blow build but for now, here's a few notes on construction:

The Branchlines Isle of Man 3-plank drop-door "H" series goods wagon is supplied moulded in whitemetal with a plastic floor. It comes with wheels and non-working couplings.

I built the model using Zap-a-Gap superglue in a hurry.

First up, the floor has to be trimmed to size. In the instructions this is 24mm by 53mm. That's too short as I discovered when putting the ends on. A couple more mm would be better.

The body assembled easily enough after this - although I made a pigs ear of the corner in the photo. Never mind, I'm sure this is fixable. Underneath the solebars have to be straightened (mine were a bit wavy but the metal is soft enough to tweak) and shortened a touch.

Axlegauards are drilled for bearings and then glued in place. Care must be taken to get the axles parallel and ensure the wagon sits level.

Finally, the door stops. I couldn't find a decent photo that showed them so the parts are in the spares pot at the moment. Once I'm happy they survived to the period I'm modelling - something many of the 3-plank wagons failed to do - I'll fit them.

At the moment the wagon stays unpainted as it's role is to be shoved back and forth over the trackwork. No point in damaging the paintwork by handling it with flux covered fingers after all !
Posted by Phil Parker at 2:15 AM