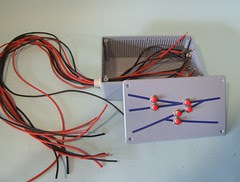 I have a dirty little secret to own up about. Despite all the blog posts, and an appearance in the Hornby Magazine yearbook (Number 3, still on sale), Melbridge Parva is not as other model railway layouts. There is something lacking. Something that didn't seem that important but will always make it less of a layout than others.

You see, I had a deadline for publication. I was also about to start a new job which was going to munch up my time like I consume chips after a night in the pub. Something had to give and that something was the bits that would make the trains work. The photos were to be static after all so I didn't actually need to make anything move. If I didn't mention it, easy enough when you've been asked to write about constructing the above board stuff, then who would notice ?

But now I face an appearance at Hornby Live in a few weeks and think that part of the display should be the layout in the annual. So I better make it work.

Things aren't so bad. I made the control panel and even the leads that will run to it. I must have been having a good day as these wires are super-flexible silicon covered things, not cheapo stuff. A SCART plug and socket is in the "to do" box of bits along with a DIN plug for the transformer feed (that is where I plug the power in, not sustenance for robots in disguise). The point motors are fitted and the frog polarity switching is in place. I just need to join all this lot up and make it work.

How long can this take ?
Posted by Phil Parker at 1:33 AM

Can't be as bad as Borchester though, surely...