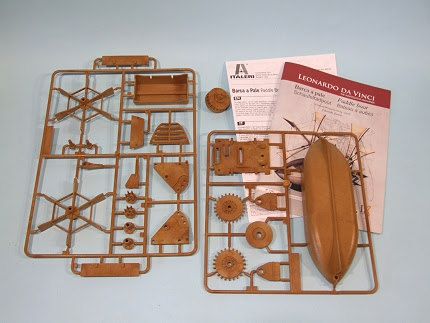 Many more years ago than I care to think, I went all the way down to that big London town to see a Leonardo de Vinci exhibition. After queueing for an age to get in the door I skipped the first two galleries and raced ahead to the middle of the event. This was partly because they were very crowded but mostly because they were concerned with his art and I wasn't that bothered. To be honest I think I made the right decision 'cos I've seen the Mona Lisa and it's rubbish. Mind you, displaying it behind a brown glass screen and a dozen badly dressed Americans doesn't help.

Racing past the hoi-ploi, I was heading for the Leonardo does engineering drawings bit. The centrepiece of the display was a life-size recreation of his famous flying machine. The one with a bloke in the middle and some wings. The result was as air-worthy as my car but that's not the point, this bloke was a Wallace (of Gromit fame) years ahead of his time.

Anyway, for some reason the model kit world is full of chances to build some of Leo's inventions thanks to at least two different manufacturers. Being a boat fan, I've picked the Italeri Paddle Boat kit to have a go at.

The model arrives in a decent sized box. As well as the sprues there is a clockwork motor, instructions and a full colour booklet explaining the point of the thing. As Jennifer Aniston would say, "Here comes the science bit."

The boat was designed to be sailed by two men. One would win the toss of a coin and get to steer. The other had to peddle on some planks, just like a cross-training device found in a modern gym. Lots of effort with the only consolation being that your mate has you waggling your bum in his face and so if he isn't very good at the steering, you dole out punishment with a little "jet propulsion". Through a clever mechanism the paddles would revolve and the boat move forward. It's the mechanism that everyone gets excited about. 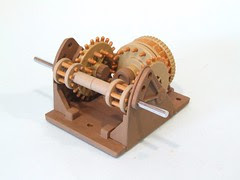 Which is a shame as that's the bit you don't get. Instead there is a look-a-like powered by clockwork. That's not a bad thing as it means the boat can be sailed without needing mini people. According to the box the model can be assembled without glue, paint and in only 30 minutes. That's true but it looks rubbish. I painted the different woods varying shades of brown and it all looks a lot better to my eye. And since I paid over 20 quid for this kit I want to spend some time building it.

Buy the kit from Amazon
Posted by Phil Parker at 1:56 AM