The plan for the panel 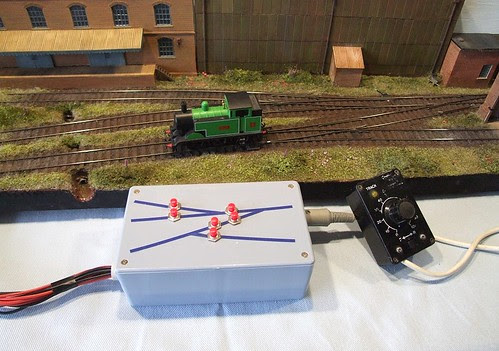 Before I start, perhaps I should quickly explain my plan for the panel on Melbridge Parva. If I were a management consultant, you'd have to pay thousands for this bit but since I am a nice person (sometimes) instead, here it is for free.
All of the layouts I've build since I was about 14 have been designed to be operated from the back. The reason is simple - when I exhibit a model railway, the audience is at the front looking at the display and I am at the back, making it all happen. I know there is a fashion at the moment for operating the layout from the front but I don't hold with this for a couple of  reasons:
But the Parva is different. I might want to operate from the back and I might want to sit it on a table and work it from the front. That means the control panel has to be movable. Fortunately a small layout needs a small panel which will fit on to the top of a plastic box from Maplin. The controller can plug in the side of this and all the wires come out in one bundle and attach under the baseboard.

I wouldn't bother with all of this for a larger model, or one intended for use as a "proper" layout rather than an adjunct to a demonstration stand. Then I much prefer to build the unit into the baseboard. It's more reliable and involves less plugs and sockets.

Of course there is still one issue with this plan. Where will I put my mug of tea ?
Posted by Phil Parker at 5:56 AM