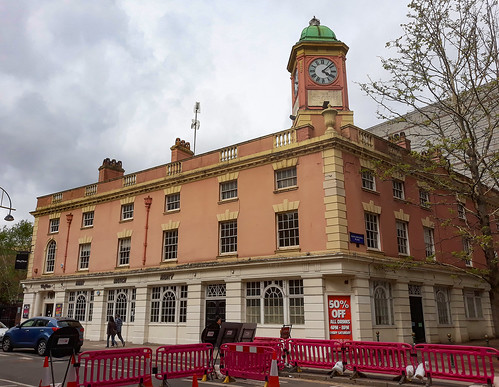 Heading to a 'spoons on Broad Street in Birmingham (classy, I know), I spotted this rather impressive building. Dating from the time when the city was a powerhouse of industry, it appealed to me as a potential major building on a dockside model railway layout.

The upper floors looks like something Superquick would design, but are a simple scratchbuild. The lower windows would be trickier without a laser cutter, but an alternative design could be worked out.

The best bit is the clock tower set at an angle to the corner. I like this bit best as it says something about civic pride. This was never meant to be a dodgy nightclub.

You can see the building on Google Streetview.

If the clock tower is built of solid masonry (as it indeed appears to be) the necessary supporting structure will have an "interesting" presence in and through the rooms on the floors below.

In miniature, I suspect the modeller would be open to an accusation of having a creative imagination resulting in something unlikely (in terms of building construction).

This is, therefore, a wonderful example of reality being stranger than one might expect.

This was built as a pub. In the early 1980s it was an oasis with Bass bitter. Everywhere else sold the fizzy brew X1. The saloon bar was often a favourite with people celebrating marriages performed at the Birmingham registry office across the road. The Pub was grand inside, but the toilets were basic.