Why you need an in-line fuse 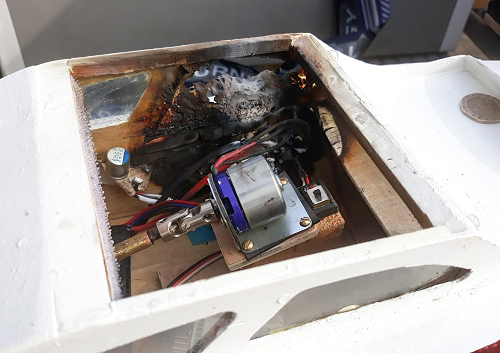 A couple of weeks ago, I arrived at the model boat club, put my boat down on the bench and wandered over to see a friend who was having trouble with his boat.

It didn't seem to be responding to the control and people were joking they could see wisps of smoke.

Being tall, I tried wielding one of the long poles we have for boat recovery, this isn't that unusual, but couldn't quite reach. As I waved the pole around, there was smoke, and lots of it. Then a flash of fire, enough to flip the top off the model. OK, this isn't fixed down to allow access, but it's still pretty impressive.

A longer pole arrived and the boat was recovered, still smouldering. On the bench, the problem was diagnosed. Weed had firmly wrapped itself around the propeller and fried the brushless speed control. 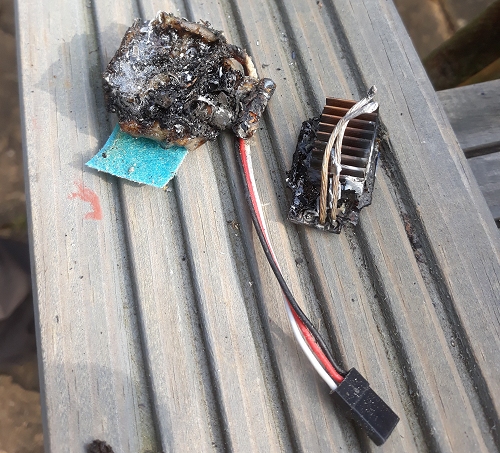 This had overheated and burst into flames. Luckily, it's a wooden boat so apart from the plastic windows, the model survived and will sail again.

Electric experts tell me that an inline fuse would have saved the speed control. Presumably, once the current draw rose, the fuse would blow and all would be OK. I think I need to invest in a few of these 'cos my plastic hulls wouldn't be so lucky!
Posted by Phil Parker at 5:30 AM

Whilst an inline fuse would protect against sudden large increases in current draw, a *well designed* speed controller shouldn't self destruct if it's over-loaded either!

You should be able to apply a direct short circuit to the output and the circuit either sit delivering its maximum rated current, or it should trip out itself - possibly occasionally trying to self-start again to see if the overload still exists.

It could be that this unit was faulty, or it could just be a poor design with no basic protection. ...either way, it might be a brand to be careful of!

You should always use an in-line fuse between a motor and the ESC , for any Boat or even a Railway locomotive such as LGB, have seen lots of damaged Boats and Locomotives over the years that could have been avoided by using a simple fuse.