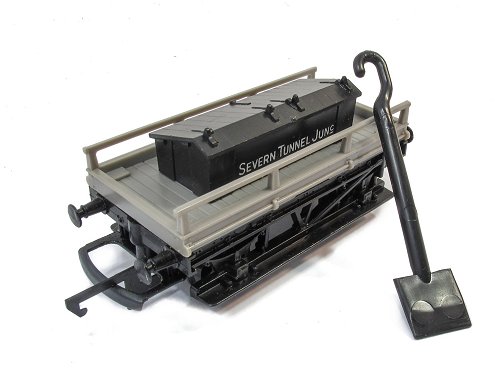 Hornby might have produced a high-quality shunters truck a few years ago, but even though it's considerably better detailed, my heart belongs to this 1973 version.


For it's time, the model isn't bad, but the highlight for me is the shunting pole - that black plastic piece with a hook on one end and a spade on the other. As a device for operating tension-lock couplings, it works surprisingly well. At least the spade end does, I never have much luck with the hook. In a perfect world, the handle would be longer, but then it wouldn't fit in the box.

Over 80,000 examples were made, so this isn't a rare collectable. Being complete with the pole adds value though, as many of these would be lost in play. Not a huge problem, as alternatives have always been available.

I picked one up last year (boxed, with pole, £5) to go with the rest of my Triang/Hornby stuff.
I'm pretty sure I had one in my yoof; if not, I certainly wanted one after seeing the prototype at Didcot.
The pole works OK for me provided there's enough space to use it, perhaps the hook would be useful for the back siding or whatever? Despite its age I think the model at least tries to look like the real thing which was fine to my non-critical 13 year old eyes and, oddly enough, is again now I'm 57!
Cheers,
Simon.