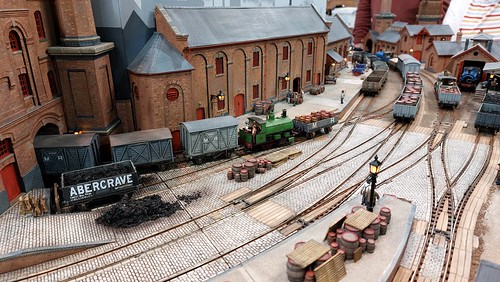 First show visited as a punter, for longer than I can remember, and I'm pleased to say that Stafford at its new time of year, and in it's new hall was as good as ever.

OK, they had booked the same number of exhibits as in the past, but in a bigger hall they were well spaced out. This is a typical first year in a new venue problem and will be solved in the future by adding more exhibits, or at least this is what I'm told the plan is.

Before heading to a show, I usually work out with Andy if there is anything it would be worth pointing a camera at. The answer was yes, but we'd already featured many of the layouts in the past - that's how high the quality was.

Andy bagged a shoot with "Copper Wort", and I was jealous as it's a stunning roundy-roundy based in a brewery. The small circular layout format is one I'd considered for the never (yet) built follow up to "Melbridge Dock". The idea works really well, especially with the high level of detail. It's definitly the layout I'd like to build from the event.

I didn't bag that many photos on my phone as I was too busy chatting and shopping (more of that next week) and generally enjoying myself.

There are a few more photos over on Flickr. 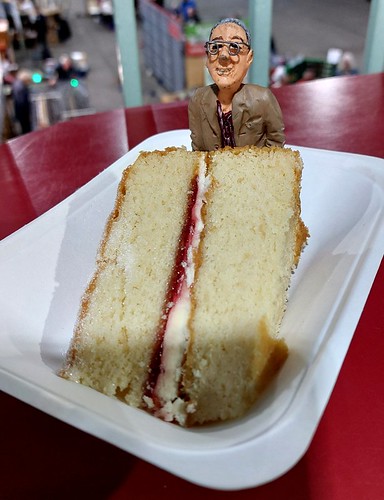 You'll want to know about the cake of course - I started with the in-hall cafe where Little Phil enjoyed some Victoria Sponge. I'd give it a 5/10 as it was a bit dry. However, for lunch I left the hall and headed to the old cafe, where as well as more spectaclar cakes, which I didn't try, I enjoyed a delicious beef lasagne. It seems that a lot of visitors didn't get a pass-out to do this, but I'd certainly recomend it. For a start, even though there's plenty of seating in the hall, this was quieter.

So, all in all, a good day out. Nice train. Nice bus each way. Good show with lots to see and buy. Second hand stall up to standard, extracting £25 off me for stuff that I'll need help identifying in some cases. I hear that the show broke even, providing a springboard for a bigger event next year. That and some good feedback online bodes well...