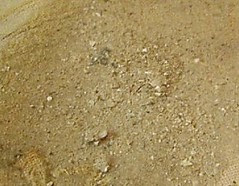 crud
Originally uploaded by Phil_Parker.
My carburettor is dead.

The cause is the stuff in the photo. A weird silt that built up in the bottom of the carb and all the passages. It’s obviously the residue of the muck that was in the petrol tank. Normally it would have flushed through but with the van off the road it solidified. It also ate its way into the metal with several stains on the body and ancillaries. The stuff in the pump fitting took some serious drilling to remove.

I obviously haven’t got all of it though. Since carb cleaner – a pretty vicious substance – won’t shift it I have to choose between spending lots more time cleaning or take the hit to my wallet and buy a new one. Of course I can’t guarantee this will fix the problem but the first cleaning improved the power a lot so I’m hoping a new carb will get my van on the road properly.

Email ThisBlogThis!Share to TwitterShare to FacebookShare to Pinterest
Labels: Type 2