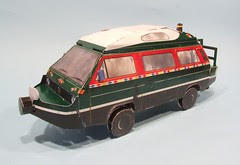 I know what you are thinking, "A badly made card kit, how is that a project ?"

You are right. This is a badly made card kit. I put it together pretty quickly from one of the spin off products from the BBC TV series Top Gear found in a charity shop. For those who don't know the programme, this is an amphibious camper van "built" by Richard Hammond for one of the teams challenges. It's based on a VW T25 or Wedgie and proved to be pretty hopeless as a boat, sinking in the reservoir pretty quickly.

Of course this didn't worry me. I love VeeDubs and I love model boats. As soon as I saw the programme I knew I wanted to build one of these.

As with any project you need to start by amassing some prototype information. The real Damper Van was built by M&P Steelcraft (Not Richard Hammond) based on a knackered VW picked up by the production team on eBay. It was converted and then trailered to the site for filming. The shots on the road were (as many Top Gear stunts are) staged purely for televisual purposes. In fact the telly people broke the rudder doing this as it was never supposed to be attached when on terra firma !

Real anoraks will also spot that a subsequent challenge to cross the channel involved a different van with a higher bow and slightly wider hull. This was just as successful as a boat. If you want one of these, them Marks & Spencer make a toy that doesn't appear to be available in the UK.

Anyway, with no plans available I was chuffed to find a well engineered card kit on sale in a cheap book shop. A couple of hours work and I have a 3D model suitable for taking measurements from. If I was really keen, gluing the parts rather than relying on the clever locking tab system would produce a good looking model. A bit of bracing and some varnish and I reckon it would even float. I have a better idea though...

In the meantime, if you want to see the real vehicle, visit the Beaulieu motor museum. And send me some photos please !

You can buy the kit from Amazon if you fancy having a go.
Posted by Phil Parker at 7:52 AM