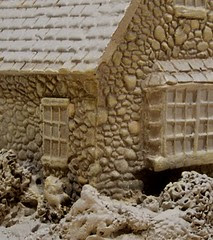 Despite being back on enamels, I'm still fighting the Kinkade cottage painting.

With the acrylic painted removed using a toothbrush and some washing up liquid, a nice grey base coat was applied with some car primer. OK, I know this is technically an acrylic again but it sticks unlike the painty sort. Anyway, I pretty quickly added to this with some stones picked out in greys (different ones rather than the supplied very similar versions), browns and creams.

Once dry a couple of washes with the thinned track colour went on to try and bring out the mortar. With my pessimist hat on I wasn't surprised when the paint sat on the surface of the stone and eshewed the valleys between them. This thing just doesn't want to painted ! Another attempt dotting thinned paint onto sides washed with clean turps seemed to go better but I still wasn't convinced. For a model rather than an ornament I might have lived with this as the overall effect wasn't bad for worn stone. This is supposed to be pretty though, so I dry-brushed the raised faces with Humbrol stone colour and then pale grey.

This finally seems to have produced the desired effect which I suppose shows that persistence pays off in the end and we don't always get it right first time.

Note: I know the photo doesn't really show the effect. It will once I do the other bits. You need the contrasts with the grey primer. Honest.
Posted by Phil Parker at 5:13 AM