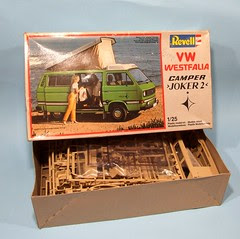 While I might admire the card kit Damper Van, I didn't ever intend it to float. That's too much like hard work and even if I managed it, the result would be a floating card kit. I planned a beautifully detailed model showing this offspring of the unholy matrimony between VeeDub and barge...

Anyway, plastic floats better than paper so my starting point is the biggest injection moulded kit I can find for the base vehicle. After discovering that the Revell kit I sought was out of production, I tracked one down on eBay, where I paid rather more than the 2 quid written on the box ! This is of course prototypical as the Top Gear version was also sourced from the famous on-line auction !

At 1/25 the model is smaller than the card version but I reckon there is still space for radio gubbins. I'll be ignoring the left hand driveness of the kit and will have to scratchbuild the correct roof but at least the fiddly bits are done for me.

And before you ask, no it won't work on land. Reading the article on building a 1/10 DKW in Model Boats magazine would have dissuaded me from trying this even if I was daft enough to think I could make a proper amphibious vehicle. I'm sure it's possible but that way involves many, many hours of hard work and development not to mention proper engineering. This is to be a boat. Admittedly one that is camper van shaped but a boat most definitely.
Posted by Phil Parker at 5:42 AM