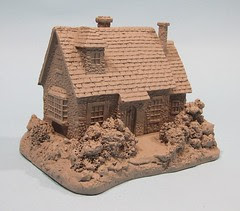 My maturing pile of modelling projects includes all sorts of rubbish. It's not just home to high quality etched kits that will one day be made into exquisite miniature representations of whatever they are supposed to look like. No, sometimes I like to do stuff for fun. Simple stuff. Stuff that doesn't matter.

And I sometimes pick my projects by the size of the box. Biggest box wins. Which is why the current workbench occupant is a Thomas Kinkade cottage presented to me in a box with some acrylic paints and purchased from a cheap bookshop - the place that things that don't sell go to die.

In the box is a rather nicely moulded resin cottage. No one will mistake it as an example of a building nicked from Pendon. It's more in the style of a "collectible" sourced from the back of a Sunday newspapers free magazine. Pretty enough but a bit cartooney. Incidentally, Thomas Kinkade is apparently a real person, a highly collected artist no less. Although the web site doesn't mention it he even produces, via Bachmann, a range of On30 train sets and rolling stock intended for those Americans who feel the need of a model railway around the Christmas tree.

The model in my hands is obviously the by-product of the huge Kinkade empire. It's a sort of paint by numbers kit except you are colouring a 3D object and there are no numbers, just a sheet of instructions.

Never mind - I like painting things and this looks good relaxing evening entertainment as I get used to the daily commute. Who knows, perhaps it will inspire me to get out the casting gear and make my own Sunday Supplement Specials !
Posted by Phil Parker at 7:36 AM

I must confess to having a couple of little cottages like that on my shelf in the workshop..they were free with tea, as I remember. Something to do with that fascination we model makers have with tiny worlds, I guess.

Years ago, a customer asked me to build him a large terminal station building in 4mm, but he wanted me to use a job lot of Superquick police station kits that he had bought cheaply, and some of the Airfix canopies that had "Gamages" labels on them! He'd had those a while. Inwardly, I turned my snobby finescale nose up, but money is money, so I got on with the job. And boy, did I enjoy it! It was such fun. As you say, I wasn't agonising over millimetres or accuracy...it was relaxing. I think that's what a hobby is supposed to be, too. I'll have to get one!