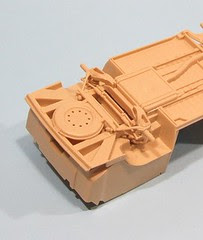 This is a fun rather than a serious project and I've found one of the good bits. Since the model is based on a plastic kit, where I can, I'm just sticking bits together.

In fact I'd forgotten just how much pleasure there is in simply chopping a part of a sprue and sticking it to the other bits. The front end suspension assembly took me just over 20 minutes to put together and that involved paying some attention to the instructions. The results look pretty accurate as far as I know and if they don't well I don't care very much as when the model is in action as it will all be under water.

Of course there is a bit of concern at the strength of the parts. The kit is designed as a static model after all. Everything is well washed with Mek though to ensure everything is well stuck so hopefully all will be OK. If it isn't some blobs of superglue will sort things out.

But this was 20 minutes of of pleasure. All the bits fitted. No fettling was required. No test and fit, just fit and glue. At the end of the job I had a complicated looking assembly that would have taken forever in brass of whitemetal. Makes me fancy an Airfix Spitfire next... 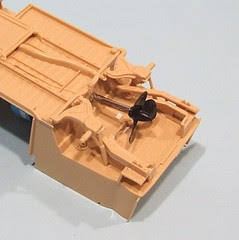 Anyway, at the back end there was a touch of work to do. The kit version of Volkswagens engine is modelled very completely but would get in the way big time if I fitted it . I chopped things up so the stub axles are in place but the driveshafts inwards have gone to make way for the propeller. This bit is more of a worry as there isn't much support - the suspension parts aren't meant to do it all on their own - and I worry that the back wheels will just cave in at some point. Again, Mr Superglue will be coming to the rescue if required.

Never mind, I have kit for a VW engine to put together as well just for the fun of it. Well it seems a shame to waste the bits.
Posted by Phil Parker at 5:13 AM