A bad day with transfers 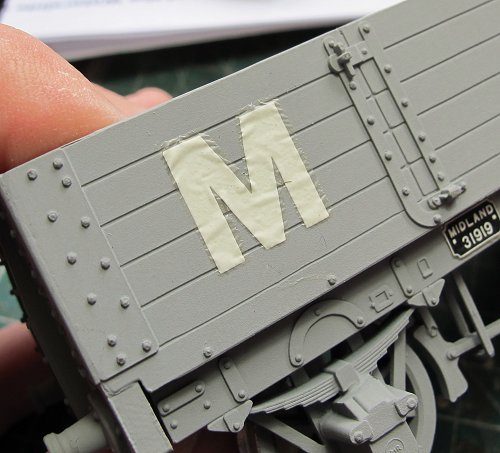 This is the picture of a bad day. When I took it, I didn't know it was going to get worse.

All I had done was pop the transfers on a Slaters kit. They are lovely waterslide letters and went on well. What happened next was my fault.

To make the letter sit down into the grooves between the planks, I used copious amounts of Micro Sol. This worked well so once I thought it had dried, I decided to finish up with a quick spray of Testors matt varnish.

This caused the transfers to bubble up. Now this might have been a reaction to the varnish, or simply me warming things up with a haridryer expanded air trapped underneath the latter.

More Micro sol and some prodding helped a bit and eventually I rescued the situation to my satisfaction. Not as good as when first applied, but acceptable. Then I patted the transfer with a paper towel and after 3 dabs, it came off and screwed itself up...

Do slaters still use methsfix transfers?

Slaters are waterslide transfers as far as I can tell. They certainly work well that way - as long as you don't muck around afterwards!

Die cut masks - I could see these working for the larger letters.

I may be wrong but that paint finish looks matt. Was the picture taken after it was over sprayed with matt varnish or before. All the advice I've read from the experts is to only apply transfers to a gloss surface and then apply a matt varnish. A matt finish by it's nature is slightly rough.

You can apply transfers to a matt finish, the result can be air trapped underneath resulting in "silvering" or a sheen appearing behind the clear transfer film. Adding Micro sol can sure most of this by making the transfer grab the surface better, but it won't eliminate it. Ideally, you apply them to a perfect gloss finish, but this can be difficult to achieve. This problem wasn't caused by putting transfers on matt though.

Interesting, the last slaters O gauge kit I built had methsfix transfers. It worked ok but I was terrified about the paint finish. I must have been 14, it came from Home of O gauge! Now that was a shop