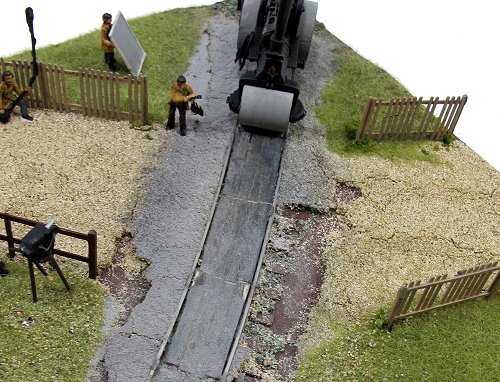 Bouncing my first cake box diorama, the one showing a scene from The Titfield Thunderbolt being filmed, around the country in the back of the car has not been kind to it. The road surface made from chinchilla sand has broken up badly and taken much of the weathering powder cinder packing (used in real life to stop the roller falling off the back of the level crossing) away with it.

The materials were stuck in place with watered down PVA and it either hadn't bonded to the foamboard base, or changes of temperature and vibration had broken the bonds. 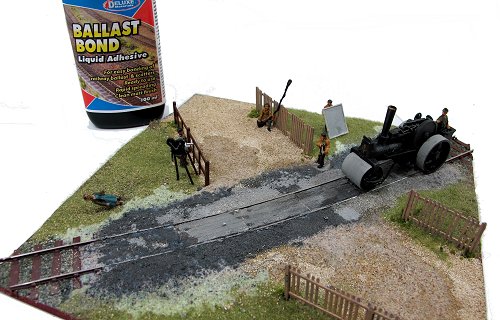 Replacing the sand was easy enough and as an experiment, I've fixed it with Deluxe Materials Ballast Bond instead of PVA. Grey powder was then sprinkled on by picking some up on a brush then tapping the side so it showered down evenly.

Left overnight, a couple of new cracks appeared in the road, easily dealt with, but the powder had dried dark grey.This looks odd so I brushed more powder on dry. It sticks well enough to such a rough surface without fixative. The loco was glued back in place, crew figures restored and it's looking good again. 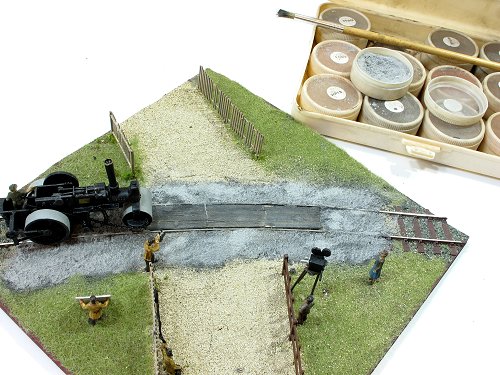 Why all this trouble? After all, the project has been seen by plenty of people in print and at a couple of shows. Well, it's back on the road again. Tomorrow, I'll be appearing at the Digitrains Open Day - they have been building cake box dioramas too and so we'll have a mini exhibition. I'm there all day, so if you are in the Lincoln area, please drop in and say hello.

Are there any plans for the Digitrains "cake boxes" to find their way into a future issue of BRM - just in case they might help inspire some of us to dream up some credible ideas of our own?

We are now featuring models from RMweb in the magazine - January sees the first. I suspect that there will be a lot more, you don't pass up this sort of content!

"...you don't pass up this sort of content!" And that includes the cake...

I shall indeed be in Lincoln tomorrow, I live here :)

Sadly it doesn't look like they have a puffer bottle for static grass in stock on the website, so i'll have to check in store and if not, I can pick up a magazine or something I'm sure whilst visiting and then head to the other model shop we are lucky enough to have.