Finish up all the cakes day - National Tramway Museum 2017 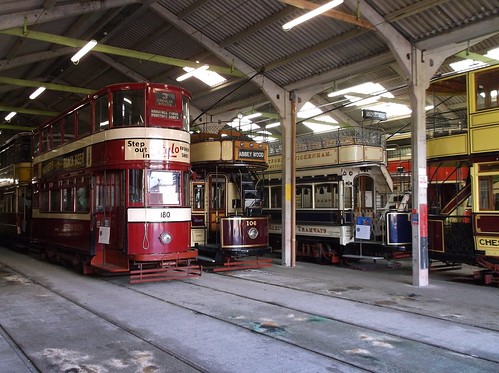 Strictly speaking, this is the Members Day, when friends of the tramway museum come along for a final ride and look around. I was told (not sure if this is true but it makes sense) that an important part of the day is scoffing all the food that might go off in the closed season. It's nice to be able to help reduce the pie stocks by one...

Surplus books and periodicals are sold off - I picked up several Manx booklets that I think aren't in the Parker collection, and if they are, the prices were so low it's not a problem. Spares can find their way into the model railway club library eventually.

To be honest, it was a freezing cold day, so the obvious trams to be out were Blackpool Toastracks and Boat. The view from the hill in Derbyshire looks lovely, but sometimes you want windows and a roof. With trees denuded of leaves however, the scene did look a little different.

Highlight of the day for me, was the emergence of Douglas Head No.1, the only survivor from the Douglas Southern Electric tramway, from the great hall. OK, so she was hauled out by an electric tug vehicle, but to see the tram in the sunshine made the cold trip worth it.


More photos from the day over on Flickr.
Posted by Phil Parker at 5:30 AM

Email ThisBlogThis!Share to TwitterShare to FacebookShare to Pinterest
Labels: tram