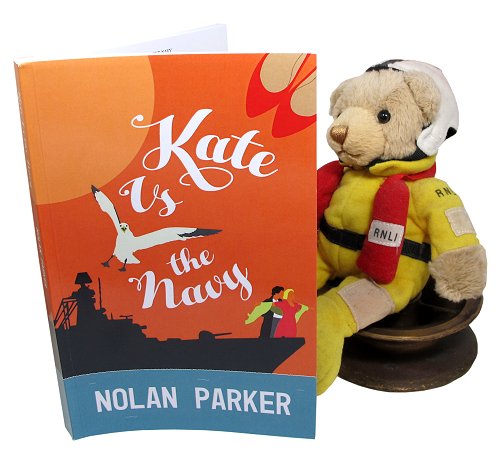 When I'm not making stuff, I can sometimes be found writing fiction with a friend. Our latest novel, "Kate vs the Navy" is now out and available from Amazon.

It's a good read, at least according to the people who received pre-production samples, and in case you are wondering (yes, those are red shoes on the cover, but you get a ship too) not chick-lit at all.

Gareth Fothrington-Thomas has made a huge mistake. He’s given Dave Thomas a job without consulting Kate. And Dave and Kate have history – embarrassing, complicated history.


But the Ministry of Defence have just asked KoD Associates to oversee the closing of an almost-forgotten naval base. It’s the company’s biggest contract yet, and a good performance could mean Kate can finally buy Gareth out.

However, nothing is ever straightforward. Tracey views work as a chance to have fun. Kelvin’s virtual life is far more exciting than his real one. And Captain Norris and his crew not only want to stay employed, they’re also keeping a secret. A rather large grey secret.

When Kate misses a key meeting she feels the whole process slipping out of her hands. Even an unexpected upturn in her personal life can’t compensate for the worry that things are about to go horribly wrong …

Join the team who first appeared in Kate vs the Dirtboffins as they become reluctant and unwelcome guests on a tiny island, battle local wildlife and tackle the Royal Navy in another madcap adventure.

Kate vs the Navy on Amazon

Perfect for Christmas and cheap too (I know you like that) - go on, give it a go...

Email ThisBlogThis!Share to TwitterShare to FacebookShare to Pinterest
Labels: novel

Considering how much I enjoyed the first book, I cannot wait to read this one. Amazon is being Amazon and wanting to send it to some random person's kindle, but once I have sorted that, I shall purchase and give it a read and of course, a review also.

If you know a publisher who would take on a couple of unknowns then we'd love to. Sadly, unless you are a celebrity, it's very, very difficult to break in to the traditional publishing world. Pity really, as then the publisher would have paid for cover design and proofreading!

That said, self-publishing is sometimes the route to traditional publishing, 50 Shades of Grey went that way and it's not the only one.