Sometimes my model making has had to be done on the cheap and while buying wagon kits wasn't too much of a problem, at least for the little layouts I build, sheets of transfers have been a step too far. I'm sure these have become relatively cheaper over the years!

I also hate applying the things. Fiddling around for ages trying to make rows of numbers line up is not my idea of fun.

So, I developed the idea that as long as the basic shapes were OK, you could get away with wagon numbering applied by brush. I wouldn't do this for a loc, but most people don't scrutinise wagons as closely. Since they will be on the end of a good weathering, this hides things even more.

This can be seen in the photo above. The letters and numbers are a long way from perfect but on the layout, with things moving around and so much to look at, hardly anyone spots it. A good result and since pots of Humbrol 147 are cheaper than transfers, a saving for me.

More recently, I realised that Geoff Kent was doing a similar thing. He applies his wagon numbering with a mapping pen and white ink. 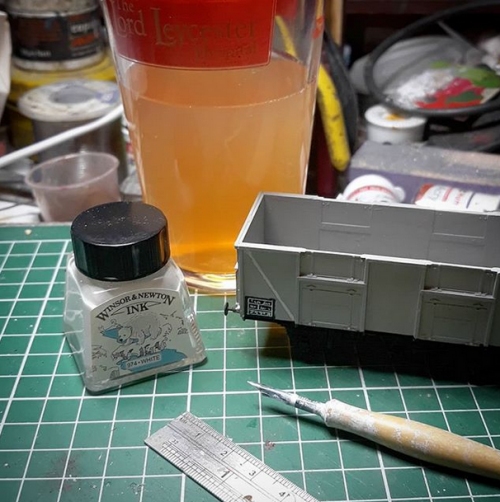 A trip to an art shop furnished me with the requisite tool and material and for the last few years, I've been learning penmanship skills. OK, I'm a looooongway from Geoff's abilities, but it's a step up from what I did before, still cheap and once weathered, will look fine.

Even when the effects of the rhubarb cider have worn off.
Posted by Phil Parker at 5:30 AM