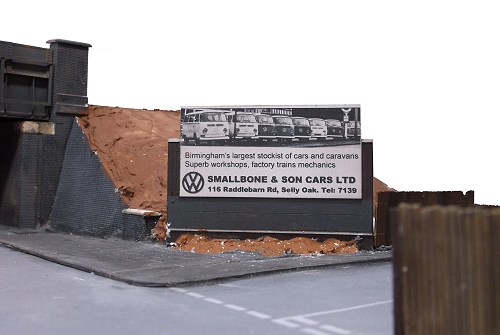 I've mounted an adverting hoarding on the Selly Oak hill, but looking at photos, the realisation dawned that it wasn't big enough. Looking these things up online, I found this handy guide.

Basically, a 48 sheet poster (so called because it's made up of 48 bits of paper) is 20 feet wide, bigger than the Wills hoarding and as large as I could fit in the space.

Scratchbuilding something suitable in plastic wasn't that hard. I could see half of the prototype in a photo and guessed most of the measurement. There are some billboards near our local station that provided a bit of inspiration. Since they are on a junction, I've spent many hours looking at them while waiting for the lights to change.

The problem came when trying to find a suitable poster. I didn't want anything for a film as this sets the date of the model very precisely. Trying to find anything suitable for the late 1960s to early 1970s though - nightmare! There are a few modern ones around, but nothing for my era. Those I found tended to be portrait too. Oh, and although it might be authentic, no cigarette adverts please.

Two hours later, and thoroughly frustrated, I decided the Internet was rubbish and dug out my copy of Advertising the Beetle 1953-1978 and had a look through. VW advertising of this era was iconic, and since the basic shape of the car didn't change much, it should work for an extended period.

Sadly, the adverts tended to be magazine ads, but there was something for a local dealer that looked like it might work. Scanning in the image (good for 1968 onwards) and matching the fonts, I mocked an advert up for a local garage. I'm no designer, but the end result looks OK to me.

Most importantly, it doesn't stand out. I'll use coloured posters under the bridge where there are more hoardings, but this muted version will fade into the background in photos. 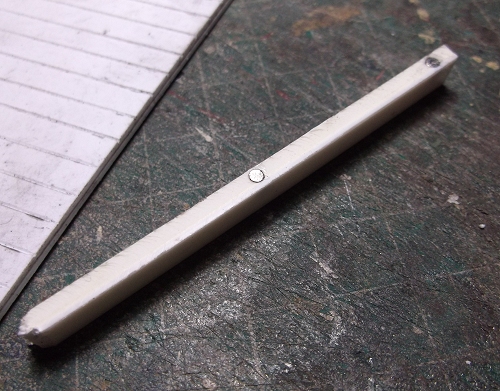 In an effort to make the advert removable, I set a couple of tiny high-power magnets in the supporting posts behind the hoarding. The idea was that I could mount adverts on a piece of tin, and hang them to vary the scene.

Great idea but did you realise there was a typo on the advert - usually mechanics are factory trained not trains . . . . . . . but as you write about trains all day, it's an easy mistake to make.

Was the mis-spelling intentional ?

No. But I think I might leave it for the fun of it!

In my experience, those magnets will hold another magnet, but not a piece of metal. Perhaps worth bearing in mind if using them again?

Smallbones are still there but...did relatively small firms like that actually pay for that kind of advertising? Bristol Street Motors perhaps, or All Electric, possibly

I'm confident Smallbones have been around long enough. Not so sure about the others. I wanted something reasonably anonymous though - an odd thing for an advert, but I don't want this to dominate the scene when we take photos.

Well, I guess it's either that or small tubes sunk into the baseboard and pins / cocktail sticks coming out of the base of hoardings.