Do I hate N gauge? 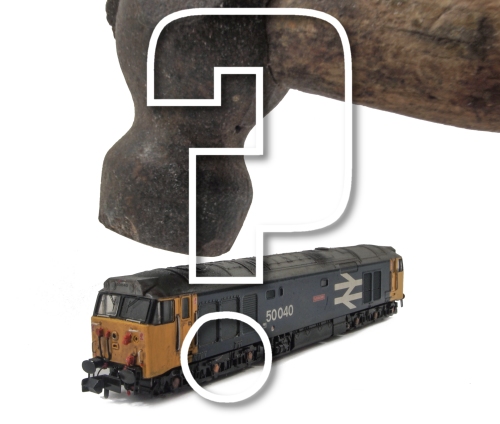 I approve all comments before they are posted on this blog. It's important to stop spammers getting through. Anyway, a few days ago, this turned up:

a long time between N gauge blogs Phil. I could say that does show an editorial bias against N gauge. That is fair enough and I understand we are all swayed by our personal interests and as I stated on RM web yesterday that is a problem with all the mainstream magazines that N gauge is underrated by them. Not enough articles are put forward perhaps precisely because N gauge IS underrated and the 'catch 22' situation arises. I can understand BRM's perspective but personally as a specialist N scale retailer I struggle with RM' position however, (which exists partly as a Peco promotion media), that they fail to promote a good chunk of their product range other than in their own adverts, (random page fillers). Which brings me on to the other current magazine obsession with giant half, and even full page pictures, which when depicting an N scale model of only a very few centimetres long can be made to look completely ridiculous and as never, ever intended to be viewed. So there is another problem where magazine editors can't help but show a bias in striving to fill acres of newsprint. Moan over. Roll on TINGS.

Some context might be useful here as it's nothing to do with the Blue DMU post the commentator tried to leave it on. There is the thread running on RMweb: Is N gauge under-rated. As part of this I explained that the main reason magazines aren't stuffed full of N gauge layouts is that we don't get sent details of many. There might be some superb RTR available, but if anyone is buying it and building model railways matching the quality, finding them is proving difficult.

However, that's not the point. Quite simply, it's no use coming on here and having a pop at me if your favourite scale or prototype isn't receiving the coverage you think it should, because,

this is my personal blog

As I say at the bottom of the page. Anything on here isn't part of my professional work. No-one pays me to write about building Space 199 props, obsolete model loco building or 3mm scale diesels. On this blog, I get to built and photograph anything I want, and that includes weird stuff.

What I don't do is N gauge. I've nothing against it, but it's just not my thing. I have built N gauge projects for work, and enjoyed doing it, but with so much to chose to build, on here, I'm more likely to construct an odd-ball monorail than anything in a scale smaller than 3mm. That's just the way I am.

Someone will point out I post details of my work in BRM and Garden Rail on here - the former is so I can remember which issue various projects were carried out (the Blogger search engine is very good) and the later because I can. As I say, this is my blog!

So, I'm happy to have the conversation about magazine contents with anyone. In the context of the RMweb thread, on RMweb would make sense. If not, well, my e-mail address is hardly a state secret.

To repeat, this is my blog. No-one gets to tell me what should appear. Ask, yes, I'm always happy to respond to requests, but tell, no.

Oh wow, what a way to shoot yourself in the foot. Creating a new profile on blogger and adding your place of work to the name whilst sending that type of message only serves to do one thing, alienate yourself and the model shop you are associated with from the readers of this blog.
Sure, there may be the odd fan of N Gauge here who feels a twinge of sympathy and agrees with your point, but are they now likely to flock to the website to place an order? Sadly I doubt it, so I just do not see what the hope was by sending that message.

I love the "Editorial bias" part, anyone who has been here a while will know there is no editorial work happening here, we get a straightforward, warts n typos n all approach to posting and I wouldn't have it any other way. I hope that in response we get a build of a completely random model in a random scale that serves no purpose other than to bring the builder enjoyment.

In closing, I'd like to offer this to Maurice Pearce, "Put up or shut up". If you are unhappy about the lack of N gauge in BRM, go build a model and submit it for inclusion in the magazine. Don't go attacking the staff personally for choosing not to do something that you, yourself have failed to do.

Huh, the hide of some people & here I am waiting for a posting about joining Modules.
I have a great idea I wish to share & wish to post it appropriately.

Clip together track can be used for the module joins when clued to foam boards for modules.
These foam boards are supplied from a large retail hardware chain in sizes 4' x 2' with a thickness of 1", AUD $12.50 each.
May I dare suggest a Narrow Gauge layout using N scale track gauge.
Somewhere to display your models & possibly go around getting continuous run enjoyment from them, an advantage from a smaller track gauge..

I had the impression you liked building & scale wasn't ranked, especially your wagon in every scale display.

The reason why I read your blog is precisely that it's YOUR blog...ok, some of it passes me by but I find the majority of it interesting and I never know what I'm going to find when I hit the "Phil's Workbench" icon on the phone.
I doubt I'll ever build a garden railway or do much boat modelling though I could be SERIOUSLY tempted by 3mm scale! I do model in N so it's nice to see layouts in the scale featured in magazines but I accept that it's always going to play second fiddle to 00. As for the bias thing, for every one who thinks that a magazine is biased against their favourite scale I suspect you'll find someone else who thinks that particular scale is OVER represented (I've certainly seen this argument regarding the amount 009 in RM on one of the forums for example).
Had a look at the links from this post...that pic of the blue DMU is excellent...the only indication of scale I could see was the coupling.
It's certainly very evocative, hopefully I'll be able to get to my local preserved line soon and get a ride on their real DMU albeit in green rather than blue.
Simon.

No P4 either, shame on you Sir! I shall be writing you a strongly worded letter in due course.

They wwere rather nice full page (and more) pictures of Tucking Mill in the last BRM.

OK I know that it is finescale 2mm, but there are few better adverts for showing the scale rivalling the best in any scale.

Like Simon says, it is the eclectric nature of the blog that is a massive part of the appeal

Nick - "a build of a completely random model in a random scale that serves no purpose other than to bring the builder enjoyment." - oh, have a I got a good one of those lined up...

Simon - I'll admit I like that DMU a lot. It's even got sound! And FWIW, I've said before that the sound from a Graham Farish GWR loco is the best I've heard in any scale. The lack of bass isn't missed in N like it is in larger scales.

James - Noooo. Don't say 2mm is N gauge. There WILL be complaints!

Given the apparent dis-satisfaction felt by some N gauge modellers for Osbourne's lack of customer service as reflected in the relevant thread on RMweb it would be better if Maurice Pearce spent a little time reflecting on his organisation's operations / failings, rather than criticising others.

Simon Hargreaves' first paragraph sums up my feelings for your Blogspot exactly.

I've seen a fair number of N gauge articles recently in the magazines.

Ppersonally I've no interest in boats or garden railways. I do however model in N.

I still read the bits here that do interest me. Some of the older items from Beatties I enjoy as it was the first real shop I remember visiting in our local city (for classic Tomy Train set pieces). I really enjoyed your Warehouse Wednesday posts. I'm like watching your practical videos even though they are most on layouts of the 'wrong scale'

Would I like to see more mainstream content around modelling in N, certainly. Things like static grass is mystery in such a small scale. There are some excellent N gauge layouts about and RTR models have gotten better.

If I'd come here expecting an N gauge blogger I'd be disappointed. I come here to read something interesting and different to my normal.

Your blog, your posts, your rules.

As an N-Gauge modeler I come to this Blog to get ideas that I can use in my scale, just because it is OO gauge doesn't mean I can't use the skills and methods explained here, I will never model a boat but it was interesting learning how you solved the problems of water entering the boat and also how you fixed your old car. In Oz we have a few VW Combie Vans around and when I see them I think how Phil would like that. So carry on posting things that interest you, because somewhere someone also likes that.