Probably should have got a BOGOFF on this model... 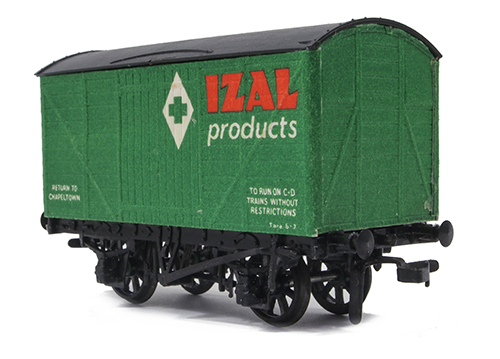 I've been at the MRC second-hand shop again, and among some useful stuff, I picked up a few oddities, the first of which is this Peco Wonderful wagon.

Youngsters probably don't know who Izal are, and that makes them very lucky indeed!

Izal toilet paper is thin, slippery stuff that smears rather than wipes. "Popular" in public conveniences and outside facilities years ago, it had no redeeming features whatsoever (go on, someone come up with one) and is one of those products that convince me that "the good old days" weren't as wonderful as misty-eyed old folks would have you believe. 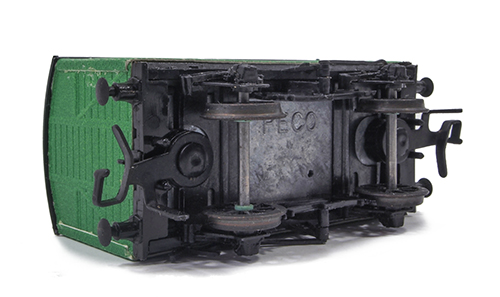 Peco Wondeful Wagon kits were a clever way to produce easy to assemble kits to bolster your fleet when the RTR world offered a limited selection.

Embossed card sides fold around a plastic core, and the result isn't bad at all if assembled neatly as as been done here. The chassis and wheels were good for their time, and passable today if you aren't an underframe obsesive.

One day, those couplings will have to go, but I'm not sure if they will be replaced by tension locks or Sprat & Winkles. It all depends what sort of layout this makes an appearance on. I quite fancy is sneaking on to a "proper" layout one day.

I imagine Izal's redeeming feature was it's complete absence of theft-appeal!

This stuff was in use at the Grammar School I attended.
My one memory of it is that certain individuals used to write cheques on sheets of it,
"IZAL Medicated Bank Ltd., Pay Bill Scroggins £30 Million Pounds" or whatever!
Unsure whether this constitutes a redeeming feature or not though.
Nice wagon and it certainly deserves a place on a layout for the dual nostalgia of a Peco Wonderful Wagon and the product it advertises.
I wonder whether the common practice of using tissue paper to simulate canvas roof coverings would work using Izal Medicated? Doubt it though as I suspect paint won't stick to it.
Simon.

I can offer two possible advantages. Both ballistic. There used to be a tradition of throwing toilet rolls at football matches. I would think that they would unroll faster in flight. The second is, I seem to recall reading that observers in Fairey Fulmar aircraft put elastic bands around them and throw them out of the cockpit when they were being attacked by enemy fighters. As soon as the rolls hit the airstream they exploded and the fighters would break off the attack to avoid flying through the “shrapnel”.

"smears rather than wipes"

My Grandfather swore by Izal. My father, when visiting, used to smuggle in his own soft paper. Dad was tough, but not that tough!

Nice wagon, I'll be keeping an eye out for one myself now.

I have a fuzzy memory that you could take a sheet of Izal and wrap it around a comb to make a sort of poor man's harmonica with one rather nasty note. You can't do that with the modern soft stuff as it would get all damp and stick to your lips.

About 4 decades ago, we were buying computer printer paper (continuous form). One supplier was rejected immediately because my boss said it reminded him of British toilet paper.

I think we can safely assume that the "British toilet paper" in question would have been that Izal c#@p.

When I was in junior school (about 45 years ago), the teachers were supplied with loads of boxes of the stuff - to issue to kids - for use as tracing paper!

To be honest, the stuff seemed to be indistinguishable from greaseproof paper - so it was of absolutely no use for its official purpose.