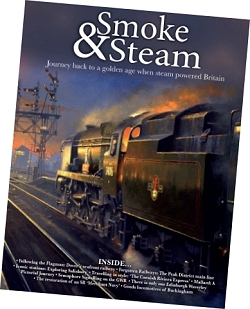 Something new in railway publications launched last week - Smoke & Steam is a new bookazine from World of Railways.

My contribution is a piece on weathering model steam locomotives. There's isn't a lot of modelling content in here, but as publishers of BRM, we were obviously put a little in.

The bulk of the articles are well-written prototype pieces by respected authors. Each is a long-form article with plenty of illustration. To ensure quality, those same writers have "peer reviewed" each other and changes made. In addition, the BRM team have had a look as well.

Semaphore Signalling - Why the GWR was different – Mike Romans

I'll admit I have a favourite - Following the flagman - because of the cracking images of dockside steam locos including P class and B4 tanks. With one of the later in the "to do" pile, I'm not going to bother looking much further for my prototype.

Last week, I was in the office and got my paws on the test shop (an EP in toy train terms) and was mightily impressed. This doesn't feel like a bookazine, it's a softback book. The paper quality is very high as a coffee-table publication was the aim, and I think it's more than there.

You might say "Well, you would say that" - and I'd certainly have told you that I had an article in there as I always do, but not be quite so impressed. The gestation process for this publication has been protracted, but mainly due tot he effort put in to make it as good as possible and not a cheap/quick mag to grab a few quid. There's enough of those already!

At £9.99 for the paper version, this isn't cheap, but the money is all on the page. The plan is to get this in WH Smith later in the year, but if you want a copy now, they can be ordered in both paper and digital forms right now.