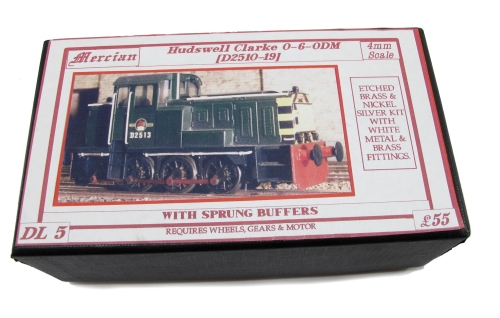 For a few weeks, I've been in the mood to do some soldering. Maybe this is a sign of my modelling mojo returning, or just that I fancy doing something a bit different. Whatever, I've been dreaming about messing around with hot metal.

Out of the stash has come this Mercian Models kit for a Hudsell Clarke 0-6-0 diesel-mechanical shunter. It looks quite a lot like the BR Class 07 with it's central(ish) cab and bonnet front and back. I've always like the 07, so this appealed as something a little different.

History records these locomotives as another odd purchase. By the time they appeared, the standard BR shunter offered either 204hp or 350hp. Was there really a benefit in a tiny class producing at the lower end of the scale? Perhaps they were a welcome re-design from nine earlier HC shunters (D2500 to D2509) with their distinctively steam-era styling, complete with chimney and bunker, but that's hardly a reason to buy more is it? Those machines also lasted until 1967, so were arguably more successful, even if none were preserved.

The locos found themselves allocated to Birkenhead, Borrow-in-Furness, Watford and Crewe South, whose staff must have been delighted to receive orphan locos whose quirks they would have to learn when maintaining them. 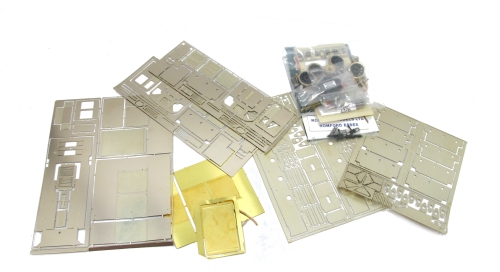 Anyway, the kit wins it's place on the workbench by virtue of being complete - I have the earlier HC design to build one day, but need to sort out wheels and motor, so that can wait for another day.

Most of the model is etched in nickel-silver, so promises good soldering. The instructions are exploded diagrams, and apart from the jackshaft drive, shouldn't be too challenging to build. Good, because my loco building skills are distinctly rusty...

When mercian dropped 00 as a range, I bought a good number of their industrial loco kits. I really must crack on...

I've built the A1 Models kit for the same loco, which turned out half decent. One problem that I had was that the bonnet side doors were all etched the same size, so some had to be cut down as they're different depths on the prototype. I do like an accurate carefully researched kit...