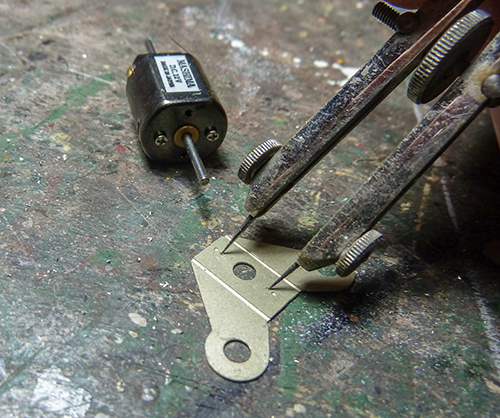 I'm still rusty at kit building, but some things are starting to come back to me. The gearbox in this kit seems familiar for a start.

The etch looks a bit hand-drawn. That's not a bad thing if done properly - the method is to work 4X normal size, so any errors are reduced when the parts are etched. To be honest, using a ruler and pair of compasses, an accurate part shouldn't be beyond the wit of man.

Anyway, the first job is to work out which of the half-etched holes should be drilled out to fit the motor. The compasses quickly establish this - I think I've done it by eye in the past and things haven't gone well, but this time there's no problem at all.

One common feature is that the hole for the motor boss is too small - no problem to open out with the tapered reamer, but if you've not done this before it might be off putting. Do NOT just screw the motor to the metal without opening out the hole, you'll bend things in a very bad way.

More opening out is required for the axle bearing holes. Again, easy with the right tool and not bad practise as over-large holes are a nightmare to deal with and model railway etching isn't always as precision a craft as we might like. 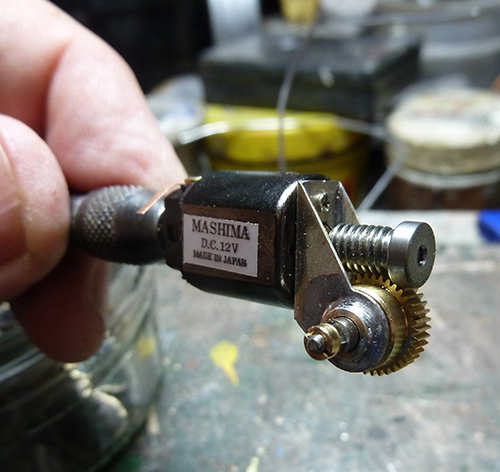 A much bigger problem arises when it's time to fit the worm gear. The one supplied had a great big, fat boss with the grub screw in it. It's so fat, that we find the motor is fitted off-centre in the cradle and the boss rubs on one side. Bad enough to stop the motor turning. I have no idea why this is, but it shouldn't happen.

A bit of fiddling around and it seems I can mount the gear backwards on the motor spindle with the boss just clearing he crown gear.

Now, I seem to remember this being a show-stopper in the past with replacement gearboxes being the order of the day. Hopefully, I'll get away with it this time...

You need a lathe (or a mate with such tooling).

As for hand drawn etch artwork, I have an unfinished A1 Models class 05 shunter in the cabinet, drawn up by a 'respectable' designer (his workshop once featured in t'MRJ), that the bonnet top angle doesn't match the front window angle is bad enough but having miss-matched holes for the buffers (one higher than t'other) is frankly unacceptable.

Ah yes, the 05 kit from A1. I built it in the 1990s. It was supposed to fit the Bachmann 03 chassis. I rang them up to ask how this was supposed to go through the solid footplate and was told I'd need to make the big hole myself as the kit hadn't been redesigned to accommodate it at that point.

The model turned out OK. One day I'll build the chassis I bought to go underneath it, the 03 chassis having moved under a different loco.

Mine came with a chassis, into which I fitted a High Level gearbox. It did run quite well although it hasn't turned a wheel in years. Must dig it out along with a length of EM track to see if it still does.

Would it not be possible to just lop off the huge & horrid boss with a piercing saw and then just fit the remaining worm gear with something like Loctite 638?

Luke - Possibly, but it's not in the way and at the moment, I'd like the flexibility to take the motor/gearbox apart if needed.

Paul - I bought a part-built P4, fully compensated chassis from the club 2nd hand stall years ago to do this. Well, it was cheaper than buying the bits. It's in the stash, but as you'll see next week, re-gauging chassis is a skill I have developed!