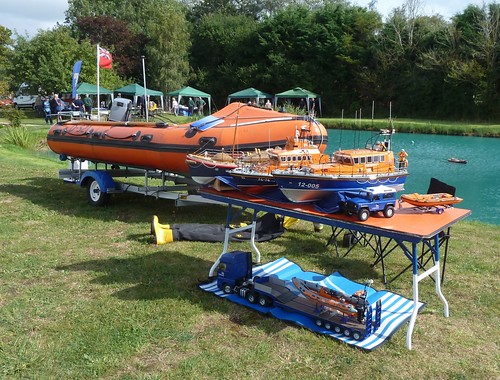 A nice sunny day and lots of orange boats, what more could you want on a Saturday morning?

Cake? Yes, there was some of that, but I can't find my photo.

The chance to buy some stuff from a second-hand stall? Yes, I managed a few bits of wood, a random bag of plastic propellers and a couple of tools that I'll bring to you later, once I've had a proper play.

And, of course, and RNLI stall, who took some money off me too.

Prize of the day though, is a lifeboat I've always wanted. And by chance, a friend who does a lot of work for the RNLI had acquired one. On his book stand, there was a 1930s tinplate collecting tin, and I happened to mention that I coveted the plastic lifeboat launch version - and for a small donation, it was mine.

I remember these as a kid, and am chuffed to get my paws on one. There will be more on it once I've figure out how it works. And then the chance to donate yourself when I do a show in the future.

Sadly, it was a bit of a flying visit for me as I had some work to do in the afternoon, but at least I was able to see the magnificent Clyde lifeboat launched.