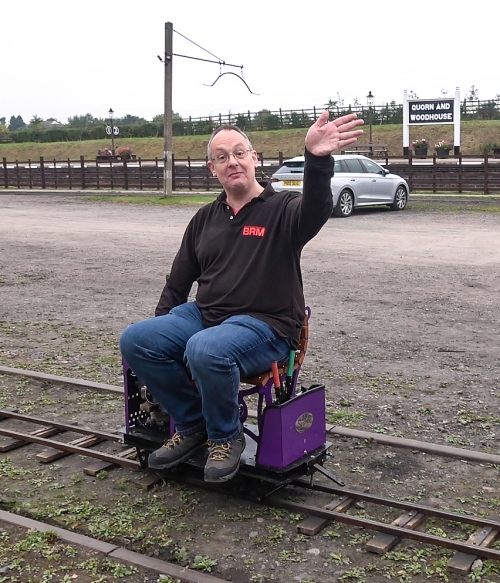 A couple of weeks ago, I was filming with the There and Back Light Railway, and Steve generously let me have a drive of his petrol-engine backup loco, a Scamp.

For those that don't know, Scamp is a 7 1/4" ride on locomotive designed by Colin Edmondson. Rather than waste space here, head over to the website for all the details, including those of the kit to build it.

That's right, this is a kit-built loco. Yours for £2375 RTR, but a grand less than that if you pick the far more fun option to build it yourself from what is, I am told, a really easy to construction set of parts.

There's more on Scamp over at Apa Valley.

Now, I really don't need any more projects, but if I did, I could be very tempted. Steve's Scamp moves at quite a rate, and since he had only just put the track down, offered a bit of a white-knuckle ride when I drove it. This thing is terrific fun. OK, I look ridiculous, but that's pretty much par for the course. 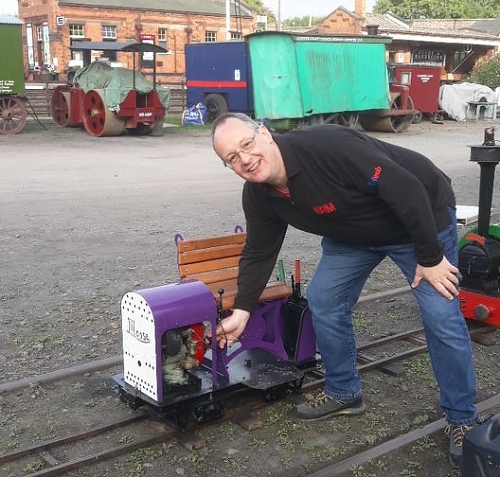 One challenge is that Scamp is tiny, and you need to balance the loco, especially if you are a tall and fat bloke. That means leaning back in the seat to keep your centre of gravity over the wheels, all while juggling the various controls (throttle, revs, clutch, brake) and trying not o break anything - both me and the loco. I'm sure Steve was more worried about the later!

Later in the day, I was also handed the controls of a steam loco, and it was also very enjoyable too, but Scamp was the one that really got me wishing I had the space for a small line...

Hopefully Teddy, the Scamp featured in the Apa Valley blog will be returning to service soon. There is an excellent book available on Scamps, via Colin who was mentioned in the article.
Balance isn't an issue for me, at 6ft and 12.5 stone, but some heavier riders do find the seat a bit cramped. One nice touch is that although you can make driving very quite complex and fun if you want to you can also make some adjustments to make it as easy to drive as a simple battery electric loco.

Being slightly taller and (ahem) slightly heavier, it was balance rather than crampedness that was an issue. Not helped by the switchback track laying. Steve eventually sorted the latter with many shovels of car park grit and some bits of wood.

I'll admit, I liked the complex driving, it was good fun juggling revs and throttle, then remembering the clutch and brake.

Glad you like the Scamp, maybe we will see you driving your own little loco at a future Scamp gathering.

You look like 1 happy Scamper who definitely has his MOJO back, haa hhaaa.

Did you prefer the petrol engine or steam loco to drive ?

There is also the enjoyable battery power of which is more like operating a Model Railway loco only that your riding on it.

Have you thought about 5" gauge with its smaller raiduses ?

A question on a totally unrelated subject & thinking the subject will never come up.
Mallard.
Do you know what colour/livery the Mallard locomotive was in when it set the World's Fastest Steam Locomotive Record in 1938 ?

There is a black & white video of this run on Youtube.

Woz - I'd assume garter blue for the record run.

My internet research (not always reliable) prior to asking you was variable but alas your assumption & The National Railway Museum web site stating Garter Blue (of which were variations over the years) was its original livery, hence why it is preserved in this livery.

Do you have any thoughts on the difference to driving ride on petrol to steam loco's ?

Woz - I think driving petrol locos is easier - the steam engine needed you to develop a feel for it. Mostly though, the throttle on the petrol loco doesn't get as finger-burningly hot as the steam machine!

Woz, Scamp can handle exceptionally sharp curves, and you can convert it to BE and back again. Both aspects are demonstrated in this video. https://www.youtube.com/watch?v=VbdxEZhfP1Q&ab_channel=Narrowgauge7.25