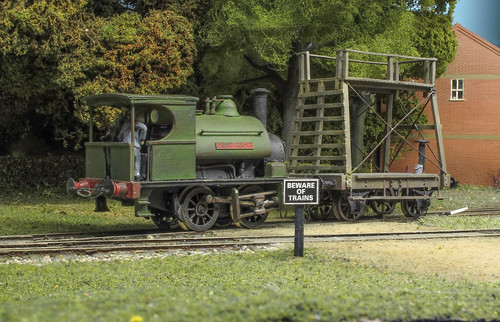 Since Hellingly represents a line under construction, and the important feature is the tramway overhead, I assumed that the contractors would have a tower wagon. The books show a very flimsy contraption, but I decided that something more substantial would be in order - and easier to build. 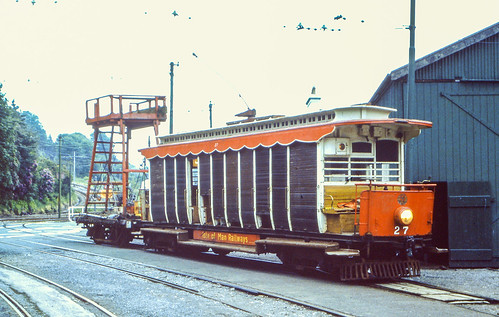 Inspiration came from the Isle of Man. On the Manx Electric Railway, there is a nice, chunky wagon and so all I did was built a standard gauge version of this from plastic. Pre-cut strips make a big difference to this sort of project - both making the build easier and the results a lot neater.

The chassis might look simple, but it is compensated as I was concerned that a tall wagon might be prone to derailment. As I recall, it isn't, but then that might be because I fitted that wobbly axle.

The loco is a Centre Models whitemetal kit that I built over a weekend at the Sutton Coldfield model railway exhibition. Glued construction, it even runs on the original whitemetal chassis - well, I didn't have many options to replace it at the show, and it works pretty well. The 'Green Arrow' nameplate is due to it's speed of construction, and that I'd painted it (by brush looking at the marks) green.

That looks great Phil! It actually reminded me of a wagon on the Launceston Steam Railway. There's obviously no OHLE so I guess it's for inspecting bridges and cutting branches etc?

Certainly looks top heavy, and I wouldn't want to be up there on a blowy day!

Phil:
This page is from our local streetcar museum.
https://hcry.org/portfolio_category/work-equipment/