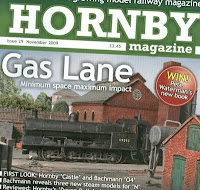 There is a departure from the norm in this Month's Parkers Guide column in Hornby Magazine. Rather than walk the reader through all the stages of building a kit, I've put together a more general guide on the art of hole making for modellers.

The piece covers various types of drills as well as the more technical reamers and broaches.
This sort of basic description is something that magazines need to do occasionally. Not every time as that would get dull, but every so often try and plug the gaps in peoples knowledge. Basic tool use isn't taught in schools any more and even if it was, the education system doesn't seem to think it's job is to teach anything useful so you aren't going to pick up any model making skills there !
Of course I could claim that the article was written with altruism in mind but the truth is that I had thought November would have been "Detail a ViTrains Diesel" month but Editor Mike decided to use two articles from me in October so I had to put something together quickly for a deadline. Plan A - Silver Fox Shunter took longer than expected so Plan B - The hole article was preferred as all I had to do was photograph stuff from the tool box.
The result is, in my opinion, not bad. It's certainly different from much of the normal magazine fare.
Posted by Phil Parker at 8:26 AM

Really enjoyed your prose - in fact I always do! A good read should inform as well as making one smile - you always achieve both!

Thanks - I'll admit that I sometimes get embarased by how many of my words have been beated with a stick by Mike though. Anyway, you aren't too bad at the old words stuff yourself, or does he give your text a similar filleting ?
Suppose we'll find out with this new book thing of yours...