Well not so much missing, as orphaned. Aultibrig and Mingulay was built many years ago by Alan Gibson (the photographer not the wheel maker). Alan died a few years ago and as he was a friend and fellow member of the Leamington & Warwick MRS, I've been helping his widow find homes for his kits and models.

The layout is built in an utterly conventional way for its time. In other words the boards are well and truly fixed in the attic. The trackplan is a roundy-roundy with a station on one side and a walled running line on the other. Most of the buildings are scratchbuilt although there is a village on the hill at one end that owes a lot to Builtezi. Control involves some switch panels, not quite the legendary Lancaster Bomber spares but nearly, and an H&M Duette. Once suprise for me was the inclusion of a small narrow gauge line on one of the hills. At a guess the layout runs for about 15 feet on each side and is 8 feet wide. Everything is OO, 4mm:1ft.

The model looks a bit dusty now. It hasn't seen any use for many years - Alan suffered a stroke and couldn't get up the attic even though he carried on modelling to a standard I can only dream of. To be honest even though they worked exquisitely, he was never a man for actually running his trains prefering to spend time building them. The layout was primarily a backdrop for his extensive photography.

If you can lay you hands on a September 1982 issue of Scale Trains then you'll see the first part of a series on photographing model railways where he covered the basics and also explained the principles so anyone who wanted to have a serious go could do. I understand these were an influence on a young Tony Wright who has gone on to take the odd snap himself. The layout acted as a stage for this and many other published pieces.

Nowadays this sort of model would be appearing in magazines as a "Layout that never leaves home" but when built it wasn't that unusual - that's how you built your model railway. Taking something to an exhibition was often a major task and the techniques for building truly portable models were still being developed. 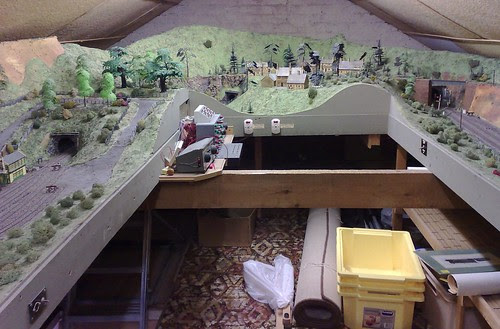 The engines and rolling stock are gradually finding new homes. The pick of the crop are in a display cabinet on the living room wall. Others have gone to new homes where they will get the chance to stretch their legs (wheels ?) on new layouts. The kit collection has also mostly found its way to new builder, or at least their maturing cupboards.

All this just leaves the layout. It's a mildly famous model and it would be lovely to think it could survive. But, it is very firmly attached to the house. At some point in the future I am going to have to go and look at removing it. For the time being the attic space isn't required but I'm sure one day this particular elephant in the room will have to move on. Quite how we go about this I don't know - well I do and it isn't pretty. The hatch it will have to exit through isn't very big.

Sadly while this isn't a missing model yet, I don't have the time or space to take it on and so one day it will be unless anyone comes up with a better idea. You are probably thinking that some of the sections could be saved and I'm sure you are right. I once helped move a model of the Swiss Alps with the aid of an angle grinder and replica vintage van (story to be told another day) BUT someone still has to do it. Any volunteers to help ?
Posted by Phil Parker at 4:40 AM

I take it it eventually bit the dust?

Still there as far as I know.