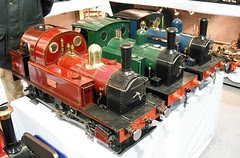 At least that's what I know after spending a couple of days standing on one at the model engineering show this week. As part of the KMBC stand my job was to hang around chatting to the public and try to answer questions about the boats on display.

All this went well. The show actually lasts 5 days and I was only there for two but I still had plenty of time to look around and marvel at the exhibits. To be honest, I still feel a fraud art these events. The stand opposite was host to the most wonderful 3 1/2 inch gauge model of a GWR Manor locomotive scratch built from brass and steel. We had kit built boats made from fibreglass and plastic.

On the other hand, compared to most people, we are at least making stuff and not sitting watching telly. The visitors seemed interested and we have several potential new members for the club. Being so close to the venue is a big help as we can say that the lake is a mere 7 miles away from where you are standing. That's important ans it should allow us to mop up all the potential model boaters in the area.

I had to be rescued at one point from a couple of old guys who wanted to whinge that the organisers had once been rude to them when they had turned up an hour early to pick up a model in previous show many years ago. Their moan was that all he was interested in making money and that they would never show any of their models there again. This was obviously something that had rankled for many years and I suspect that gripping about this was something they looked forward to every year. Sadly they missed the point - the ME is a commercial show. If it doesn't make money, it will closes. If you want something "better" then you have to organise it yourself, just like the model railway world already does. Truth is, these guys couldn't see that while they might miss being able to show their models (and get in for free), the rest of the world wasn't that bothered. More to the point, the option they seemed to prefer was for the show to close. That way they would have "revenge". And we all would have no show.

Aside from the moaners, there were lots of models on display. Quality was again amazing and well beyond when bodgers like me can hope to attain, not least because we don't have the patience to put the thousands of hours into a single model. I've taken pictures as best I can to show some of the things I liked.

Other highlights, well the brick making machine was impressive. It is a press that compacts dry clay dust into miniature bricks suitable for dolls houses and model stationary engines. I have a few samples to try in the garden railway. More on the website

There is also a neat pin-striping tool. I've seen the demo many times but during a lull in the crowds managed to have a go myself. It' really works - better than a bow-pen anyway. The results are clean and consistent. I think the smaller wheels would even be useful for model making purposes even though it's better suited to full size stuff and larger model engineering. Not cheap, but then you can feel the quality. More on the website

Talking of cost, it still scares me how little completed model engineering projects sell for. Looking at a 1/4 scale traction engine selling for £21,000 you might disagree, but if you tot up the number of hours the model will have taken to build, I bet the hourly rate was less than the minimum wage. Sadly, I still had to resist. Even the lovely 8 inch high signal lever kit which would look so nice on my desk....