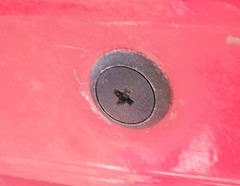 Micrafixing
Originally uploaded by Phil_Parker
This looks like a screw doesn't it. I mean it's got a cross head in the top. And it's a bit raised. Just like a screw and cup washer.

For those not familiar with the Nissan Micra, this is a fixing that holds a plate that seals up the access hole to the inside back of the back hatch. The one you need to remove when you want to unbolt a broken numberplate light/hatch handle and replace it.

This has all the appearance of a simple job. Undo the panel and put it to one side. Unplug the lights. Undo the four nuts that hold the light/handle in place. Chuck the old one away and bolt the new one in place.

And because it looks like a simple job, it isn't. That is not a screw, it's a push in plastic thing. You can turn the thing all you like with a screwdriver and it won't budge. I know. I spent five minutes on the first one convinced it would undo eventually.

In desperation I stuffed a drill up the centre of the cross. This worked.

Off came the panel and the handle/lights unbolted with a 10mm socket. Except for the one by the windscreen wiper motor which is a bit of a pig to get at - the ratchet ring spanner did the job. A fair bit of cleaning up was needed where the broken lights had been glued back in place to avoid attracting Mr Plods attention.

Replacement of any part is difficult when you've destroyed some of the fixings. It took two goes to find a suitable replacement on the shelves of Halfords. Get the big push in ones and not the version that looks almost identical to the ones you took out - they are too small and fall off.

What got me, apart from the stupidity of making fixings look like screws when they aren't, was the number of tools I ended up with for the job. This was supposed to be simple ! 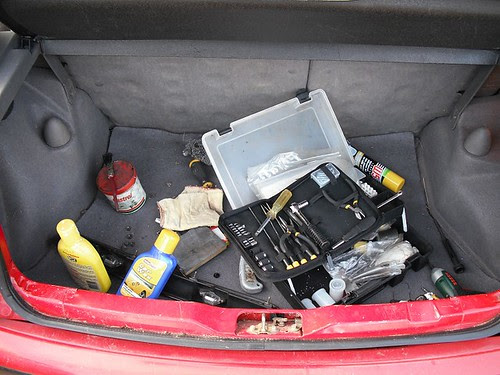