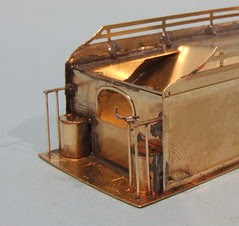 Now this stuff is fiddly, especially in 4mm scale.

While watching a old Bond film (You only live twice since you ask. The one with the volcano and odd looking space ships. And lots of occasions when baddies should have killed Bond and didn't for cinematic reasons) I noodled away with the from of the Bulldog Locomotive tender.

First up were the curved bits that I suspect the crew sat on occasionally. These would be so much better as whitemetal castings since bending the base around the top took ages and a lot of fiddling. I'm not sure if, were I to do this again, I wouldn't stick the tops on some thick plastic strip and file the latter to the profile then glue them in. I lost count of the number of times I unsoldered the top trying to get it exactly right.

Anyway, with this done the handrail supports go in. These fold into an open sided box at the end which then fits into a half etched depression in the tender front face. A job for the RSU I though but the access to the joint isn't great and much time was spent with a pencil sharpener making the probe nice and pointy so it located just where it was wanted.

Before this I did have a flash of inspiration and checked the handrail holes - which were too small. To tiny for even the smallest broach to open them out, I had to use a small drill.

At the end of this, the handrails themselves were easy. Just put them in, blob some solder around the joint and cut to length. Finally file the excess off top and bottom.

As I said, fiddly. But pretty too.
Posted by Phil Parker at 6:30 AM