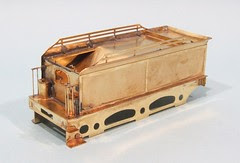 Tender with frames
Originally uploaded by Phil_Parker
Well, I thought I'd done the Bulldog locomotive tender top. But then I looked at what I had and found a couple of holes in the plate running along the top edge of the front. These coincided with holes in the base.

Strange, I thought. Wonder what they are for. And lo, the diagram showed a couple of little handles to be added. These were quickly made from some 0.45mm wire and very nice they look too. Actually they reminded me of a little box with a crank on the side that filled up odd corners of a cartoon in the Buster comic when I was a kid. No idea why this image popped out of my subconscious, maybe it was the soldering fumes !

Anyway, the the top definitely finished, I moved on to fitting the outside frames which went on easily enough. They locate into slots in the footplate and as long as you are careful to keep them straight when tacking in place, are no problem. Buffer and drag beams are the then attached, the former being laminated for extra beefiness.

The only odd moment was putting the nut in for the locomotive-tender beam. I followed the diagram and this put the nut in the middle of the hole in the beam and blocked it. That couldn't be right to I soldered it to the underside of the footplate instead.
Posted by Phil Parker at 7:25 AM